How a band progressed from nihilism to hope ... but hope in what?
Will Jones|September 6, 2011

Death Cab for Cutie inhabits a unique position in modern pop music. While not technically part of the "indie" movement (since signing with Atlantic in 2005), the Seattle band has garnered enough hipster and popular sway with their sensitive malaise to give them a hearing with sophisticated bohemians and emotional teenagers at the same time.

Death Cab has also, for better or for worse, taken its place as one of the most coherent and articulate representatives of naturalism on the American music scene today. Their songs probe the implications of the ideas that guide them, and more broadly, the culture at large; they provide an intelligent challenge to Christians considering the ultimate question of man's purpose and existence. If their music has resonated in our culture, it is because their lyrics attempt to attach ideas to the experiential soma sweep of postmodernism.

They clearly state the ideas that many other pop artists only assume, namely that life is all there is and that it is up to us to fill it. Their most recent three albums, Plans, Narrow Stairs, and the recent Codes and Keys, chart a progression through the different manifestations of our culture's naturalism, from romantic despair, to near nihilism, to the rejection of these troubling questions entirely as unanswerable and even dangerous. At the end, with no answers in sight, it is the examined life that is no longer worth living for the naturalist.

Released in 2005 to widespread acclaim, Plans sold over a million copies with its combination of hopeless romanticism and polished arrangements. On that album's "I'll Follow You into the Dark," frontman Ben Gibbard croons:

If heaven and hell decide that they both are satisfied And illuminate the 'nos' on their ... 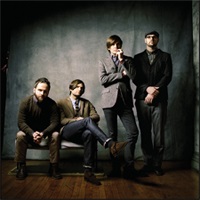