I was a bit late in discovering Thrice, a California rock band that's been around for more than a decade. I first heard of them via 2009's Beggars, which not only caught my ear but also my eye for its thoughtful, poetic lyrics. I soon learned that frontman Dustin Kensrue, their chief songwriter, had a thing for C. S. Lewis, J. R. R. Tolkien, and Leonard Cohen, and his excellence in taste certainly showed in his lyricism. 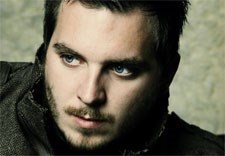 Kensrue's songwriting brilliance is once again on display in Major/Minor (Vagrant Records), the band's seventh studio album which releases today. To wit:

We were sons of insurrection, doomed to face the dark alone
Till vicarious perfection, dearly won, was made our own
So where's your landslide, where's your victory?
Tell me now, where's your sting?
Unassailable you waited, the great enemy of man
Till your awful jaws were sated, and we were ransomed from your hand
Now that you have been disarmed, we will cross over more unharmed

Those are the lyrics of "Disarmed," and there's a lot more where that came from.

We recently talked with Kensrue about the new album, his lyrics, his literary influences, and his new gig as worship pastor at a Mars Hill church plant in California.

We always want to push ourselves. In the band, there's a culture of progression. We've always pushed against doing the same things over again, always wanted to do something that was interesting and challenging. I think that's what's kept us going so long.

I think every record is different from the others. We made this one in a similar way to Beggars, the last one, but it sounds pretty different. There's more of a grungy, early '90s rock vibe to some of the progression and melodies—not on purpose, but it just started coming out in various songs. That's where the term "major/minor" started popping up. We'd hit a spot and we didn't play a major chord but instead we'd have a minor chord, kind of characteristic of the Seattle sound in the '90s. We weren't trying to do that; it just kept cropping up.

What's the story behind the new song "Blur"?

It's a dark song. Our drummer was showing us some slow shutter speed pictures he had taken. Everything's out of focus, and the images create this blurry light trail. He said that the pictures captured some of the feelings we'd had in the past year or so—a lot of loss in our band, specifically with cancer. Our guitar player's mom passed away about two years ago, and the bass player and drummer's dad passed away earlier this year. And my dad has brain cancer. It's just been kind of a crazy time. So we built that song, using those pictures as inspiration. It's dark all the way through.

I used to try to fit too much into one song, to try to "resolve" it by the end. But I started realizing that as long as I have a catalogue that's balanced, I can go into a dark spot and leave someone there in that zone, and not try to rescue them from the implications of what I'm getting at in the song. So "Blur" is leading into a despairing place, but there's a lot of hope presented in other songs to balance that out. 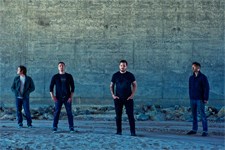 Kensrue (second from right) and bandmates

You write some terrific poetry in your lyrics. How did you get so good?

I read a lot, and I think that has a lot to do with it. I write songs in a unique way. I have a very analytical mind, which is not super common for creative types.

Using both halves of your brain?

Yeah. I'm thinking logically about these big issues, but then I'm writing songs about them. So I try to communicate that in a way that's more creative. I think I've erred toward writing essays in songs a little more than stories. I don't know. I've been doing it awhile, so I hope that I'm getting better.

Who are some of your biggest literary influences?

It would be hard for me to say who's influenced the way I write, but as far as the way I think, C. S. Lewis is pretty huge in shaping me. I think I responded to a lot of his work because my brain is so analytical. I like that Lewis's logic was clean and sharp, and that he wanted to think about faith and communicate it in a clear way, but also in an interesting and creative way.

Lewis also speaks to my philosophy of what I'm doing with my art. He has this metaphor of sneaking past a watchful dragon, something he was doing in Narnia. We live in a culture that has some understanding of what the gospel is, but such a small amount there's this kind of inoculation against it. Lewis talked about that as if there's a dragon watching for that message to come through, but before it can come past our brains and impact our hearts, it's like something in our brain is attacking it. Lewis had this idea of sneaking past that, so the dragon wouldn't know what the thing was, and it could come and impact the heart and then be dealt with in the brain. That way, someone could experience what the gospel is without trying to deny it first.

It's like that with the story of Aslan. You read the books, you see the gospel being worked out, and it impacts you, and then you can be like, Okay, is this true, this amazing story? Rather than just writing it off if it were presented in a more straightforward way. I'm trying to do that in my writing.

I'm in a band with nonbelievers, and I'm operating in a totally secular environment, but I'm trying to be real and honest at the same time. I think there's a line you try to walk to be most impactful. Jesus tells us to be shrewd as serpents. I think of Paul going into Athens, and the way he looks at the culture and thoughtfully and creatively presents the gospel in a way that they can hear it.

That's a great way to look at your lyrics. You avoid Christian clichés, but Christians will "get" it, while non-Christians might wonder what it really means.

Yeah, I think there's different levels of people engaging. Some will be like, Hmm, what's really going on here? But I think believers are usually being fed from the lyrics in a different way.

Sometimes when I ask songwriters what a song is about, they say something like, "Well, however the listener interprets it." What are your thoughts on that?

I don't think that's what you want to be doing with your songs, to be saying willy-nilly that whatever someone gets out of it, that's what they get. I think you want to intend a meaning, but I also think there are layers of meaning that you can implant. I'm often writing on multiple levels where I'm saying, okay, there's this layer that people who have these understandings will get, and then there's a layer a little further up that someone with other understandings is going to get. I think the more you open up a well-written song or book, there should be enough clues to draw something concrete out of it and get somewhere close to where the author was going.

Do you think great songs come from God?

I think that any great song is indirectly a common grace. I definitely have seen God inspiring certain things in my songs that I would readily attribute to him, either a phrase that came out of nowhere, the foundation of a song, or just seeing something come together in a certain way. Sometimes I don't see or sense that until after I've written it. Tolkien says he felt like after he was done with the trilogy, he felt like it was inspired, that God had a message for him to give. It doesn't mean it's Scripture, but it can still be specifically inspired by God.

I've heard that you might be working on a solo worship album on the side?

I'm working on a lot of things on the side! I'll be putting out some stuff at some point, but I've got my hands really full right now. But I feel pretty called to be writing worship songs. There's a huge need for theologically rich and well-written worship songs.

I hear you're working on a Mars Hill church plant.

Yes. I'm the worship director at the one we're planting in Orange County right now. It's kind of a soft-launch thing for now. We're trying to build a core group of people who are going to be on mission to see people meet Jesus in Orange County. So in the new year we're going to have a bigger push to bring people in and hopefully keep real community set up so where it's not just people coming to an event, but there's a church there.

Will you have your own pastor or will Mark Driscoll's sermons be piped in, or what?

The various plants operate as individual churches, but we will certainly use Pastor Mark's sermons a lot. But there's a lead pastor for each local church who also teaches and shepherds that flock.

How can you be a touring rock star and be a consistent presence at a home church?

Before this church plant, I was actually the college director and leading worship at the church where I grew up, so I've been able to do it pretty well, even though I was on the road at times. I'm trying to build teams to make it work here now at this church while I'm gone, but it's a challenge.

Plus you have a wife and three kids. Is finding balance something you and your wife are always wrestling with?

We'll see. It's been kind of like this for a while, new life stages all the time—getting married, one kid, two kids, three kids. New things keep being introduced. But so far, it's working. We've never really set huge long-term goals of what's coming. It's always just, look at what's next. Right now, we've just made a record, we're stoked on it, and we're going to tour it and see how it goes.

1 of 2
Dustin KensrueKensrue (second from right) and bandmates