Not so long ago, the poet W. H. Auden wrote of the "Age of Anxiety"—

Faces along the bar
Cling to their average day:
The lights must never go out
The music must always play …
Lest we should see where we are,
Lost in a haunted wood,
Children afraid of the night
Who have never been happy or good.

In his epic poem (which won the 1948 Pulitzer), Auden's four burnt-out characters are in a bar in New York in 1939, contemplating existence and identity in their rapidly changing, increasingly industrialized world. When people are being replaced by machines, and when the cultural ground—the family, the farm, the church, the political landscape—starts to shake, they get nervous. And so they drown out their nerves with lights and music and alcohol, les they should see where they are: lost, alone, and frightened.

Maybe the twentieth century was the age of anxiety, but the twenty-first is giving it a run for its money. Between the twenty-four hour news cycle and Twitter, we know every detail as it's happening: epidemics, earthquakes, hurricanes, stock market queasiness, roving mobs, and the latest shenanigans of the people we elected to lead us. We might be forgiven for being a bit anxious about the future. We might be forgiven for whispering "apocalypse" once in a while.

So might Curtis LaForche (Michael Shannon), the protagonist in Take Shelter. At first, the dreams only frighten him—nightmares, in which angry clouds roll toward the house and drop yellow rain, like new engine oil. Curtis is a construction foreman in Ohio, with his loving wife (Jessica Chastain) and a deaf but happy daughter who is the light of his life, and he isn't too worried. Yet the dreams progress; he seeks help from a doctor, knowing from personal experience that mental illness can ruin his life, pledging to protect his family.

And as the premonitions worsen, Curtis becomes convinced that something bad is about to happen, even as his rational self battles against it. This is no ordinary dream, he realizes: My family and I must take shelter. But do they need protection from the coming storm—or from him? 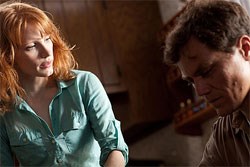 In 2007, newbie writer and director Jeff Nichols staggered critics and art house audiences with Shotgun Stories, a wise, measured tale of family and revenge (which also starred Shannon). In Take Shelter, Nichols looks again at the difficult work that adult children must do to grapple with their parents' legacies and stabilize their own families in a rapidly shifting world.

Take Shelter is a restrained and careful tale, one in which the main character is both plagued and admirable in his desire to save his strong, supportive wife and daughter. But it's also genuinely terrifying. Too many directors exploit apocalyptic visions for cheap scares; Nichols hides nearly everything from us, making us feel rather than see what Curtis is experiencing. And as Curtis, Shannon's performance (Machine Gun Preacher, Boardwalk Empire, Revolutionary Road) and his strange, squinty hound-dog face affirm his place as one of the best actors working today.

In Take Shelter, Nichols has precisely captured the zeitgeist. And we all feel it. The storm is coming, even if it's not preceded by dripping engine oil and bands of black ravens (about which Nichols subtly reminds us by putting posters for H1N1, HIV, and flu vaccine on the walls of a doctor's office and placing a jar on a counter boasting a hand-lettered sign: "My 401(k) fund").

Curtis will do anything to protect his family

Auden's characters, dwelling in the age of anxiety, look for stability in relationships and even faith before they part ways. But in this new anxious age, does Nichols have any hope for us? I'm still not sure. The end of the film is a head-scratcher, destined to provoke re-watching and late-night pondering. But for anyone grappling with what it means to be a citizen of the twenty-first century, Take Shelter is required viewing.