A funny and moralistic romantic comedy that almost gets marriage right.
David Roark|April 27, 2012
Our Rating

As a producer, Judd Apatow rarely triumphs. The American Jewish filmmaker finds funny ideas and the right people to make them work, but the strong moralism of the movies he directs himself—40-Year-Old Virgin and Knocked Up, especially—doesn't translate, usually resulting in off-color junk. The Five-Year Engagement, the latest from Apatow Productions, almost proves to be an exception. The new romantic comedy by director Nicholas Stoller not only plays for genuine laughs, but it also makes pertinent points about our culture's struggle with commitment, specifically in marriage. It gets things mostly right—and, of course, a few things wrong.

Written by Stoller and Jason Segel (who last co-wrote and starred in the wholesom The Muppets), the story details the five-year engagement of Violet Barnes (Emily Blunt) and Tom Solomon (Segel). They're clearly in love, but the problem—the prolonged engagement—turns out to be themselves. Before settling down, Violet wants to pursue a career in academia as a psychology professor, while Tom wants to be a successful chef. Their separate paths don't sync, leading to a difficult transition from San Francisco to Michigan, causing contempt and discontent. They put their marriage, and their relationship, on hold.

This plot alone doesn't stand out as smart or funny; it's mostly contrived and predictable and, at times, divergent. In the disconnected moments, like Tom growing a beard and becoming a deer hunter to deal with his unhappiness, Stoller doesn't trust his story, his characters, or his audience. Instead, he goes on random tangents, trying to sustain our interest. These deviations make the comedic style uneven—sometimes leaving its rom-com roots for a more ... 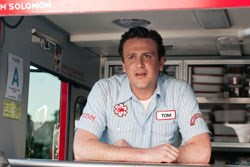