Playing a rock legend in 'Million Dollar Quartet' has been a blast for actor Shaun Whitley.
Mark Moring|April 26, 2012

Harken back to a cold Tuesday afternoon in December 1956, when rock and roll was still just finding its way—and when Southern preachers decried the new genre as sinful and straight from the Devil himself.

Four men got together that day at Sun Records in Memphis, Tennessee, the small label that had launched each of their careers—Johnny Cash, Jerry Lee Lewis, Elvis Presley, and Carl Perkins. With Sun Records owner Sam Phillips in attendance, the four legends reminisced and held an impromptu jam session. When word got out about the gathering, they became known as the Million Dollar Quartet. The foursome never reunited again.

Today, Million Dollar Quartet is a rollicking musical playing in New York, Chicago, and touring the U.S. The production tells the story of that gathering, and is not only a fantastic slice of rock history, but makes for a great evening of terrific live music—including songs made famous by each of the four men, such as "Blue Suede Shoes," "I Walk the Line," "Great Balls of Fire," "Hound Dog," "Whole Lotta Shakin' Goin' On," and many more.

We caught one of the Chicago shows recently, and then sat down to talk with Shaun Whitley, 31, who plays the role of Carl Perkins. An affable young man who ditched his native Alabama accent when his family moved to Chicago, Whitley—who has also been in shows with Chicago's Provision Theater, a Christ-centered production company—talked about Million Dollar Quartet, his character, his upbringing, and his faith. Our conversation ended on an unexpected note. Read on to see why.

Are you guys having as much fun on stage as we did in the audience?

Definitely. Every performance is different. That's one of the coolest things about it. You can say the same ... 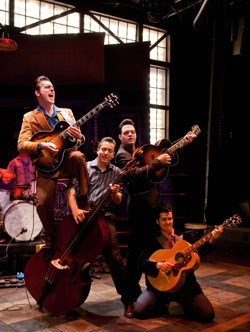