The veteran musician on his new album, 'Christian' music, and a wandering spiritual journey.
Mark Moring|April 24, 2012

Phil Madeira has had the opportunity to work with some of the greatest folk musicians on the planet—Alison Krauss, Bruce Cockburn, Emmylou Harris, The Civil Wars, Buddy & Julie Miller, Steve Earle, and many more—so when he says he'd love to someday work with Bob Dylan, it doesn't seem far-fetched.

Given Madeira's reputation, both as a songwriter and as a musician, it's not surprising that he had little trouble rounding up an impressive lineup for his new album, Mercyland: Hymns for the Rest of Us. The 12-track album (our review) includes guest appearances by Harris, the Civil Wars, Buddy Miller, Mat Kearney, Cindy Morgan, jazz guitarist John Scofield, the Carolina Chocolate Drops, and more.

"This is a beautiful record," says Miller, who sings "I Believe in You," and indeed, it is. But what it is not is a Christian record, though many of the songs could certainly fit well into the genre. But Madeira pushes back against such a label not just because it's too narrow, but also because of his own spiritual journey.

He's a graduate of the fairly conservative Taylor University, but he wouldn't call himself a conservative—or likely even an "evangelical," for that matter. "My faith in Christ has moved me away from the organization we call 'the Church,' and into what feels like a more intimate and even mystical 'relationship' with the Spirit," Madeira says. He adds that he wouldn't disagree with universalism.

It's this "inclusive" theology, combined with the angry shouting of the 2008 presidential primaries, that prompted Madeira to want to do an album of "hymns for the rest of us," and thus the seeds for Mercyland were planted. Four years later, we now have a stirring collection of songs in the Americana tradition, ... 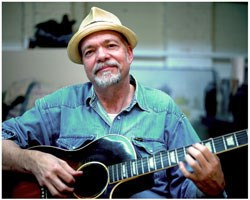