After numerous delays on their new album, the band finds itself "in a much better place."
Mark Moring|August 7, 2012

The last time we talked to Sixpence None the Richer in late 2008, they had just released a promising EP, My Dear Machine, and were gearing up for their first Christmas album, The Dawn of Grace. They—Leigh Nash and Matt Slocum—were making the most of their reunion after about four years apart, in which they both pursued solo projects and focused on family matters. But in late '08, they were very much excited about being Sixpence again, writing songs together again, and putting together a new album.

That conversation ended with Nash answering a question about the ETA on that new project. She replied, "I would say next summer at the earliest. We'll see."

We caught up with Nash recently to talk about the holdups (and frustrations) as the project faced delay after delay, going indie, songwriting with Slocum and with her husband, and why she thinks this is the best Sixpence album ever.

It is good to hear a new Sixpence album. It's been too long!

I know, it really has been. It's ridiculous. But I'm excited.

In 2008, you and Matt did an EP and a Christmas record, and said that your new album was coming out in 2009. What happened to cause more than a 3-year delay?

It was really the same old story that we've unfortunately talked about so many times before. We got ourselves into a record label situation that was one thing when it started and then turned into something else by the time we got the ... 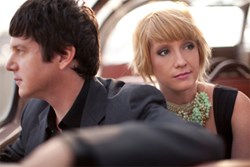