Trying to minister amid the ancient Mayan ruins of Palenque.
Phil Wyman|December 21, 2012

People have been pouring into the ancient Mayan empire in southern Mexico. Flying into Cancun on the 10th of December, Shlomy Goldman and I started our trek south to the Palenque ruins. We've met Germans, British, Czech, Argentinians, Israelis and all variety of peoples from around the globe pilgrimmaging tothe "end of the Mayan calendar." All of southern Mexico has become a site of concerts, festivals, and conferences formed around the 12/21 date, which is the supposed end of the calendar, and (some people surmised) of the World. At the very least it is considered a critical transformational date by advocates of the New Age Movement.

Our journey brought us to the End of the World Rainbow Gathering situated in a jungle palm grove 12 kilometers outside of town. The Rainbow Gatherings are hippie camping events, which have been happening worldwide since 1972. Permanent nomadic travelers, homeless, and part time hippies converged on the grove. When we first arrived, the gathering had already grown to almost 500 and in a few days has risen to at least 3,000. 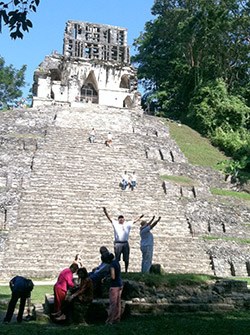 I volunteered to organize building makeshift showers for the thousands who came to the grove. Michael from Greece came to help. He and I discussed why he was here. "It has been happening for a couple years now." he said. "People are coming to greater understanding. On the 21st I believe consciousness shall rise higher." Michael's evidence for this rising consciousness is the growth of organic farming and other types of "earth concern."

Dan from Scotland came to Mexico specifically for the Rainbow Gathering. "You know what I think is going to happen on the 21st?" Dan asked rhetorically. "Nothing."

Ben is concerned that something cataclysmic is going to happen. His head is filled with terrible images from a confused smattering of the sacred texts of many religions.

Our group is not the only spiritual teachers to invade the region while a mass of humanity has descended upon the former Mayan empire. Raja Merk Dove who calls himself a Senior Interplanetary Space Ambassador visited the Rainbow Gathering for a couple days on his tour around the region. A woman calling herself the Red Queen is arriving declaring a new age prophecy to unite the Northern Red City (Sedona, Arizona) with the Southern Red City (Palenque).

At the Rainbow Gathering, people have been emphasizing love and meditating in "Om circles." We are meeting people, talking with them about Jesus late into the night, and offering spiritual counsel during the day.

A few nights ago, what appeared to be a meteor fell nearby. It lit up the night sky like noon for a brief moment. The camp was abuzz about it the next day.

I am finishing this writing at the first few hours of 12/21. In a few minutes a worldwide meditation is supposed to begin at the exact moment of the winter solstice: 11:11 GMT, or 4:11 a.m. here, but it has been raining madly for hours. Campsites are flooding. People sleeping outdoor are scrambling for any hopeful cover. Even my waterproof jungle hammock tent needs desperate help as I am beginning to swim in it.

I wonder what Ben is thinking now. This rain is falling hard like Noah's flood, and his confused smattering of religious texts must be crashing like thunderous waves through his mind. Perhaps even level-headed Dan from Scotland is rethinking his opinion.

Some people believe an apocalypse is going to happen today. Most people here believe a spiritual worldwide transformation is occurring. Both will be disappointed. The great transformative moment of human history already occurred 2,000 years ago at the cross of Christ. It is our desire to share God's love, which we have discovered in Jesus, and we know we are called to "go into all the the world and preach the gospel." That's why our little group of six Jesus followers has come to this crazy place at the "End of the World."

As I am finishing this it is 4:11 a.m. It is raining harder than I've seen in years, and a couple of the young guys in our camp are trying to command the storm to calm in the name of Jesus. I'll sign off and try to find a way to keep dry.