The moving musical of love and grace comes to the big screen with amazing performances.
Camerin Courtney|December 21, 2012
Our Rating

How do you bring a beloved 150-year-old story that inspired the world's longest-running musical (seen by more than 60 million people in 42 countries and 21 languages) to the big screen? And, perhaps even more important, why?

There have been at least seven movie adaptations of Victor Hugo's classic novel over the years, but this is the first cinematic rendition of the world-renowned musical that first debuted in London in 1985. It has all the heart-tugging songs ("I Dreamed a Dream," "On My Own," "Bring Him Home," and the rest), and is told almost entirely in song—all performed live, as opposed to the pre-recorded tracks used in most movie musicals. This Les Misérables also has impressive star power, with Oscar and Tony award winners topping the list of credits.

For the uninitiated, Les Misérables tells the tale of Jean Valjean (Hugh Jackman), a man in 19th century France who spends 19 years in prison for stealing a loaf of bread to feed his sister's starving children. We meet him as he is being released, under the watchful eye of the doggedly law-abiding officer Javert (Russell Crowe). Valjean soon realizes he is shunned by society, as well as by any potential employers. Destitute and desperate, Valjean only finds kindness from a humble bishop (Colm Wilkinson, who originated the role of Valjean in London and on Broadway), who offers him food and lodging, and an amazing act of mercy that changes the course of Valjean's life.

Following the bishop's challenge to make an honest life for himself, Valjean breaks his parole, changes his name, and becomes a respected mayor and factory owner. There he meets Fantine (Anne Hathaway), a woman ... 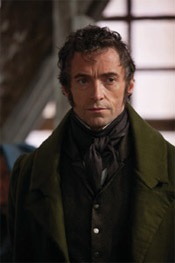