As Holocaust dramas go, In Darkness stands firmly in the tradition of survival stories like Schindler's List and The Pianist, true-story films about Polish Jews who, against all odds, lived through the Nazi atrocities of WWII with help from some non-Jew protectors. In this case, the Schindler "protector" character is the morally dubious Leopold Socha (Robert Wieckiewicz), a sewer worker and petty thief in Nazi-occupied Lvov, Poland circa 1943. Socha, a Polish Catholic with a wife and young daughter to support, is offered reward money by the Nazis for every Jew he finds hiding in the sewers below the recently liquidated Lvov ghetto. But when Socha stumbles upon a group of Jews willing to pay him even more money to protect their hiding place, he begins a journey down a somewhat accidental, opportunistic path toward heroism.

Based in part on Robert Marshall's 1991 book In the Sewers of Lvov and penned by first-time screenwriter David F. Shamoon, In Darkness—nominated for an Oscar for Best Foreign Language Film—earns its name because most of its action takes place in the murky, claustrophobic, grotesque sewer system below the Lvov ghetto, where Socha hides a ragtag band of Jews for over a year. The group—which includes the wealthy Chiger family, an older rabbi, a young con man named Mundek (Benno Furmann), the feisty Klara (who falls in love with Mundek), and the tempestuous Chaja (Julia Kijowska)—hides in wet, black, rat-filled tunnels; and yet in spite of the inhumane misery, it's a safe haven compared to the world of daylight above their heads, where merciless Nazis randomly kill Jews and ship the live ones to concentration camps.

The name In Darkness represents more than just the literal setting, however; ... 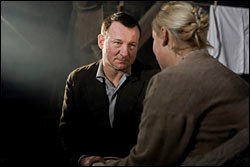