With a new album, a great marriage, and two beautiful kids, she's more content than ever.
Mark Moring|February 7, 2012

The last time I spoke with Jaci Velasquez, in the summer of 2005, the popular singer—with millions of album sales in both the Christian and Latin markets—had just released a new CD called Beauty Has Grace. The cover image, a close-up of her face, nicely captured both words—a beautiful visage that had graced dozens of magazine covers, and yet one that here was barely airbrushed; her freckles and slightly messy hair brought some earthy simplicity to her beauty.

When that album released in May 2005, fans had no clue what Velasquez was going through. Three months later, she revealed that her two-year marriage had just ended in divorce, and that she had been diagnosed with bipolar disorder. At the time, Velasquez said she had never "felt such pain before. My heart felt like it was breaking in half."

Fast forward six years, and it's a very different story. Velasquez is a ridiculously happy wife and mother of two precious children. She has been married for five years to Nic Gonzales, frontman for Christian Latin band Salvador, and they're the proud parents of two boys—Zealand, 4, and Soren, almost 3. And the bipolar disorder? All gone; apparently it was a misdiagnosis.

All of that life experience—the better and parts and the worse parts—has shaped the songs of her new album, Diamond, which releases today on Inpop Records, the label she signed with last August. As Velasquez tells it, the precious gems have to go through a difficult refining process, and even the finished products usually have flaws. But, she accentuates, they nonetheless sparkle—sometimes even more so because of those flaws.

We caught up with a positive sparkling Velasquez recently to talk about the new album, her family, and ... 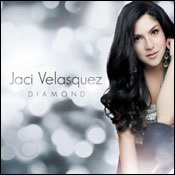