A messy film about a dirty cop that has all the elements of greatness but ultimately fails to justify itself.
Alissa Wilkinson|February 10, 2012
Our Rating

Times are awfully tough for Dave Brown (Woody Harrelson), a thoroughly dirty (though fictional) cop in the scandal-beset Rampart Division of 1999 LAPD. Things are just not going his way. Everything about Brown stinks. He's an alcoholic, bad-tempered misogynist. He's got a major crime in his past he seems both ashamed and proud of; his home situation is extremely complicated, two ex-wives to support (Cynthia Nixon and Anne Heche) who are also sisters, and two daughters (one by each ex-wife), one of whom certainly hates him and one who's well on the way. Plus he's sleeping around, maybe to numb his pain, maybe just for sport.

According to the movie's tagline, he is "the most corrupt cop you've ever seen on screen."

Brown is thoroughly unimpressed with the department's ongoing efforts to clean itself up, a sign of weakness, he thinks. And he can't stay out of trouble himself, even after repeated warnings—not that he's really trying. It's all a very high-stakes game of chicken to him, one laced with a lot of alcohol and a few other bad habits. He gets involved with a lawyer (Robin Wright) who might have it out for him, or maybe it's his old friend Hartshorn (Ned Beatty) who is after him. Someone is—he's sure of that.

The film is adapted from a book by crime novelist James Ellroy (L.A. Confidential) and director Oren Moverman, and it's a strong portrait of a cracking persona. It seems almost silly to describe it as "gritty," but, well, it is, mostly because Harrelson once again turns in an impossibly good performance (and this film is all Harrelson—everyone else, many of whom are very fine actors, are just there as props for his insanity). Cinematographer Bobby Bukowski keeps him suspended in tightly-framed claustrophobic ... 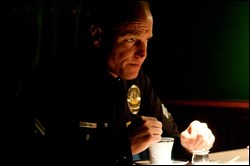