Everybody fights and everybody lies in a thriller that tries to glamorize spies while demonizing their profession.
Kenneth R. Morefield|February 10, 2012
Our Rating

I don't have any hidden microphones in the offices of Universal Studios, but I think it is a fair bet, given Denzel Washingston's credit as Executive Producer of Safe House, that at some point or other someone pitched the film as a cross between Training Day and The Bourne Identity. It shares with the former the basic plot structure of an older, more experienced veteran educating an eager but inexperienced newcomer into the more cynical aspects of their work. It shares with the latter the thematic motif of a talented covert agent gradually becoming aware that the system he works within is littered with corrupt souls who are morally indistinguishable from the terrorists and criminals he is assigned to fight.

Washington plays Tobin Frost, a one-time CIA agent who has gone rogue and is now considered a dangerous threat to national security. As the film opens, he is in South Africa receiving a computer chip with evidence of corruption and illegal activities in each of the world's intelligence agencies. It is indicative of the film's ideology that the MacGuffin chip has evidence not just against one government group that would try to kill him but against everyone. It's not that there are corrupt individuals out to silence Frost, it's that the whole system of espionage is corrupt. One cannot be a spy, the film argues, and not be morally bankrupt. Stay in the business long enough, the villain rationalizes, and you will inevitably have mistakes or "bad calls" that need to be hidden from the public eye by killing those who could hold you accountable.

Frost does not have the chip for too long before he is indeed being shot at (by mercenaries who, in one of the film's several plot holes, are later revealed to be working under the direction ... 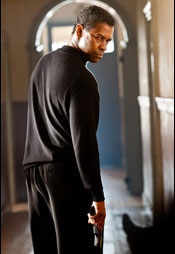