A sweet love story with its heart in the right place but a somewhat misleading title.
Kenneth R. Morefield|February 10, 2012
Our Rating

The good news, from a Christian perspective, is that The Vow is a romance focusing on a couple that is actually married. After enduring a recent slate of movies celebrating the hook-up culture (No Strings Attached, Friends With Benefits, Love and Other Drugs), it's nice to have a romantic film that shares the notion that it is natural for people who love each other to want to make a formal and binding commitment.

But despite its intriguing premise—an accident leaves the wife with severe memory loss, and her husband remains faithful to his vows—the film's plotting and conflicts are so routine that one gets very little examination of that premise. What could have been a fascinating character study about the relationship of the self/soul (the core of one's being) to one's past, one's body, or one's words instead plays out as a series of sitcom-style misunderstandings and serial conflicts that do little other than pass the time until the characters are ready to make meaningful decisions rather than postponing them until their situation changes.

Leo (Channing Tatum) and Paige (Rachel McAdams) are a loving couple whose special bond is established quickly through voice-over narration and a quirky but sincere wedding scene where they exchange quixotic vows. She promises to "abide" in his heart. He promises to love her "fiercely." Leo's small business running a music recording studio is growing, and Paige is getting important commissions as an up-and-coming sculptor. When Paige is injured in a car accident, however, she loses her memory, including any recall of her marriage or even of Leo's existence. When Paige's parents (Sam Neill and Jessica Lange) descend upon the hospital, offering to pay bills and take care of their ... 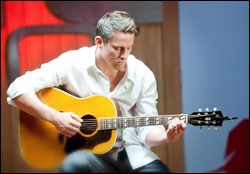