It could have been an interesting tale about King Edward III and his American mistress. But director Madonna drops the ball.
Frederica Mathewes-Green|February 10, 2012
Our Rating

W. E. retells the love story of King Edward VIII of England and Mrs. Wallis Simpson, a twice-divorced commoner from Baltimore, Maryland, for whom Edward renounced his throne. In his abdication speech, on Dec. 11, 1936, he said, "I have found it impossible … to discharge my duties as king as I would wish to do without the help and support of the woman I love," fluttering womanly hearts on both sides of the Atlantic.

Without a doubt, this is a beautiful movie, directed and co-written by Madonna (yes, that Madonna). There's an old saw about a Broadway musical so lavish that "you walk out humming the sets"; with W.E., you walk out humming the costumes. The dressing and accessorizing is so exquisite and eye-pleasing, in fact, that the movie was nominated for an Oscar in costume design. Impressive visuals don't end there; the lighting and camerawork are entrancing throughout, and we're provided with a feast for the eyes in elegant homes and landscapes. The choice of Andrea Riseborough to portray Wallis Simpson was wise, and restrained; she doesn't appear as a conventional beauty, but as a plain woman who compensates by dressing with great style. She can't fill a dress, being rather more bony than shapely, but she can bring a dress to life, and capture every eye.

This story has been told many times before, both in film and books, and Wallis and Edward are regularly portrayed with feet of clay. Whatever her other merits, Wallis was perhaps an opportunist, an expert manipulator, and it seems widely agreed that Edward was "besotted" with her. They inhabited a world of wealth and social status, but one dedicated to endless pleasure rather than duty or responsibility. Both had already been through multiple affairs, Edward having ... 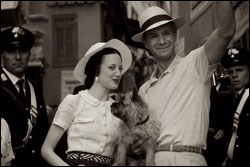