It might be easy to dismiss Albert Nobbs as a pro-homosexual, pro-feminist film with a heavy-handed political message—but only if you've merely read a synopsis or watched a trailer. In an Oscar-nominated role, Glenn Close stars as a cross-dressing lesbian in 19th century Ireland, but as it turns out, Rodrigo Garcia's period drama transcends the superficialities of issues of gender and politics to probe deeper into spirituality and human experience.

The story follows a hotel waiter named Albert Nobbs (Close) as she seeks love, freedom, and opportunity not always afforded to women in her day. In her case, she dresses as a man to obtain employment, but years later, she seems unable to escape her gender-bending disguise and wrestles with her sexual identity as a result. Regarding the "cause" of her homosexuality on the nature-vs.-nurture continuum, the film seems to lean toward the latter. Garcia, working from a script by Close and John Banville adapted from a short story by Irish novelist George Moore, understands that Nobbs' circumstances go beyond sexuality, and that her identity and actions are driven by every human's longing to love and be loved.

Garcia, who directed 2010's beautiful and touching Mother and Child, a story about the universality and sanctity of motherhood, further confirms his intuitiveness into humanity and a rare sensibility of capturing it on the screen. He not only sees into the depths of his characters, but he also possesses a transparent love for them that, in essence, extends to the viewer. This artistry and consciousness emerge in every shot and scene of his work. With Albert Nobbs, we see it in the still, quiet and graceful moments of Nobbs staring blankly at nothing, imagining herself in a ... 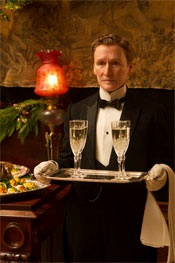