In the pilot episode of Louie, which recently started its third season on FX (Thursdays, 10:30/9:30c), Louis C.K. appears onstage at a comedy club: "I think a lot of people who think they're good people are living a really evil life without thinking about it." He continues: "There are people who just starve to death, and that's all they ever did. There's people who are born and they go 'Oh, I'm hungry,' then they just die, and that's all they ever got to do. And meanwhile I'm in my car having a great time, and I sleep like a baby."

It's a common thread running throughout Louis C.K.'s work—namely, the question of how to be a good person in a superficial and self-absorbed world, and how to recognize and respect the humanity of the other. Most importantly, as a comedian, he never exempts himself from criticism—in fact, he is most often its object. In a first season episode, Louie's title character tells of picking up a friend's rural cousin from the Port Authority; it's a story that exposes a form of inhumanity so pervasive as to be mundane:

"We pass this homeless guy and she sees him. I mean we all passed him but she saw him. She's the only one who actually saw him. We didn't. Me and her cousin were like, 'Um, so? He's supposed to be there. So what?' … She goes [to the homeless man], 'Oh my God, sir, are you OK?' We immediately go to her, 'Oh no, no, no, honey, don't.' We start correcting her behavior like she's doing something wrong. She's like, 'Why, is he OK?' 'No, no, he needs you desperately. That's not the point. We just don't do that here. Silly country girl.'"

Louis and Louie have been lauded by TV critics and fellow comedians for this humaneness, deftly addressing a range of complex topics from bullying, ... 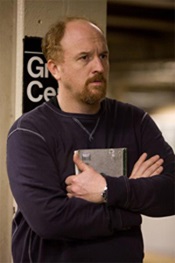 This article is from the July/August 2012 print issue. Subscribe to continue reading.