Mourning the loss of an American icon, and remembering why we all want to live in Mayberry.
Frank Smith|July 4, 2012

When I first heard this morning that Andy Griffith had died at the age of 86, my reaction was likely shared by millions—that poignant wave of shock and sadness that always accompanies news of the death of a friend. 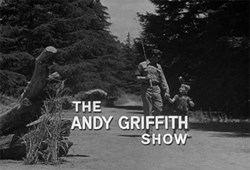 With Opie (Ron Howard) in the series' opening credits

While Griffith will certainly be remembered for many roles in his 60 years in stage, recording, television, and film, there's little doubt about which one moved us most—as the small-town, country-wise, easy-going sheriff Andy Taylor of fictional Mayberry, North Carolina.

It was a love affair from the start. Along with young son Opie and fluttery Aunt Bee, Deputy Barney Fife and a host of the funniest, quirkiest and most memorable characters ever in a Hollywood sitcom, Andy Taylor made our lives richer and our burdens lighter. The Andy Griffith Show (TAGS) premiered on October 3, 1960 and ran for eight years and over 249 episodes. It ranked number one in the ratings for almost its entire run—one of only a couple series to quit production while still at the top—and more than four decades later, it still brings laughter, lessons, and folksy wisdom in syndication and DVDs all over the world.

But what's the draw? Why do we so desperately long to live in Mayberry? Why do we listen, ponder, laugh and even shed a few tears over episodes we've seen so many times before?

Perhaps the simplest and best answer comes from Griffith himself, given several years ago at the unveiling of a statue of Andy and Opie in Mount Airy, North Carolina, the actor's home town. When asked why TAGS remained so popular for so many years, and why it served as a vehicle of blessing to so many still, Griffith replied, "It was all about love." 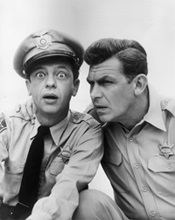 True words. Mayberry was a collection of oddballs and homebodies, little old lady bootleggers and bluegrass playing farmers and a frantic deputy who kept his one bullet in his shirt pocket. There was the barber who couldn't see straight and the rock-throwing wild man whose sidelines included escaping jail and reciting poetry. Aunt Bee made pickles of such pungent renown that their nickname, "kerosene cucumbers," has essentially entered into the public domain. Gomer the gas station jockey was as sweet as a five-year-old, and just about as gullible. And his cousin Goober had, if anything, even less worldly wisdom than Gomer.

Yet as offbeat as these characters were, they were human. They were never shorn of their dignity, never ridiculed or made fun of. Other sitcoms of the time—and all too many today—have contempt for their characters, sometimes thinly veiled, often not. We laugh at them from the height of our supposed superiority, or mock them for their failures or excesses. But in Mayberry, we are made privy to a more intimate understanding of these beloved characters. We see why they act as they do, what was in their minds as they made their choices. Barney—arguably the greatest sitcom character ever—is the greatest example of this. Bumbling but heroic, proud and silly—and yet filled with a fierce love for the small town that he believed himself to be protecting.

Mayberry's characters all showed what it was like to be fallible. And yet within their fallibility could be found real humor, not the strained, bitter, or cynical type with which we're bombarded today. Their failures and quirks were shown in their true light as just one more facet of our shared experience, our common humanity. We laugh at ourselves when we laugh at Barney, and the wink we share is a knowing one: "Yep, that's me." What a picture of grace in action. Mayberrians were prickly and proud and loving and grudging and forgiving—always starting over, admitting their mistakes and sins but never losing hope, never failing to extend grace, never failing to lend a hand. 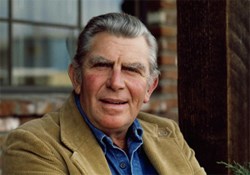 Griffith in his later years

And wouldn't you know that the affable sheriff was behind much of it. Andy Taylor, who never wore a gun but almost always wore a smile, cultivated that environment of friendliness and forgiveness. He doled out stories and jokes with a heart as big as his country smile. The town's authority figure, "the only law west of Mount Pilot," as Barney put it, Andy could have been an autocrat, a stereotypical cop, the guy who rules his town with a firm hand. But not so in Mayberry. The one person who might have had more reason than any to lose his patience or roll his eyes in frustration laughed with, not at, his neighbors. He embraced them. He loved them. And treated them as he and all of us would like to be treated: with dignity and respect, along with a dash folksy humor and a deep well of wisdom.

Griffith didn't do it alone; TAGS was a group effort of many talented and thoughtful writers, actors and producers. But he tied everything together, creating an atmosphere that was funny, inventive and warm, demonstrating day after day, episode after episode, the fine human line between comedy and drama, between silliness and wisdom.

Frank Smith is a writer in Charlottesville, Virginia. He and CT associate editor Mark Moring are diehard TAGS fans, and even play nerdy trivia games about the show. (Who did Andy and Barney listen to, every second Tuesday at 11:00? Leonard Blush. His nickname? The Masked Singer). Last month, while vacationing together in the Outer Banks, we bought Griffith a birthday card, wished him well, thanked him for the memories, and left it at the gate of his private estate in Manteo, North Carolina. We have no idea if he ever read it, but we're glad we made the pilgrimage.

1 of 3
With Opie (Ron Howard) in the series' opening creditsWith Don Knotts, aka Deputy Barney FifeGriffith in his later years