The notion of Abraham Lincoln fighting vampires screams b-movie schlock. And the trailers for Abraham Lincoln: Vampire Hunter haven't helped; audiences (including myself) have laughed with unbelief at over-the-top shots of our 16th president kicking undead butt.

However, I've learned not to judge a movie by its trailers, and this film reinforces that philosophy. Surprisingly, the horror-pulp premise and goofy name conceal an entertaining action ride with solid characters, surprises, humor and charm.

Perhaps the success of the underlying story shouldn't be a surprise. After all, when Seth Grahame-Smith (author of Pride, Prejudice and Zombies) released his 2010 book of the same name, the L.A. Times said, "a writer who can transform the greatest figure from 19th century American history into the star of an original vampire tale with humor, heart and bite is a rare find indeed." Because Graham-Smith adapted the book to the screen himself (with several smart additions/omissions), the movie retains much of that originality, fun and heart.

While dressed in horror movie motifs, this action flick plays much like a dark superhero film. By day, mild-mannered president. By night, an axe-wielding crusader. In fact, Vampire Hunter is modern folklore—a yarn about a man of mythic proportions performing amazing feats. Every generations' folk tales echo the themes and technologies of the day. Ours no longer drive steam engines or labor with an ox. They wear capes. Or kill vampires in 3-D.

It all begins when, as a boy, Lincoln witnesses a man attack his mother. His anger-fueled quest for vengeance leads a now-young adult Lincoln (stage actor Benjamin Walker) to the odd but charismatic Henry (Dominic Cooper). Henry reveals that Lincoln's ... 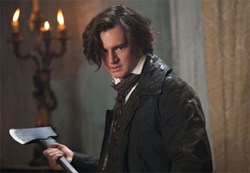