On the 50th anniversary of 'To Kill a Mockingbird,' Hallie Foote remembers her dad.
Mark Moring|June 20, 2012

Hallie Foote was only 10 years old when To Kill a Mockingbird was published, and only 12 when her father, screenwriter Horton Foote, adapted Harper Lee's Pulitzer Prize winner into one of the great films of all time—winning Foote the 1963 Academy Award for Best Adapted Screenplay.

Hallie, now 62, says she paid little attention to her father's work as a child, but she certainly has grown to appreciate it—and his vast body of work—over the years, calling him "the great American writer." Now, on the 50th anniversary of the release of the film, she is reminisces about Mockingbird, her father's legacy, and why his work resonates with Christians. She spoke to CT as part of a publicity campaign for a special screening of the film by the Academy of Motion Picture Arts and Sciences.

I have a very serious question to start our conversation. I understand you played Grandma Lois in Paranormal Activity 3?

What would your dad say to that?

He would laugh! I had a really good time. And I think that's what he would always want me to do.

Fair enough. Let's talk about To Kill a Mockingbird. How would you describe this movie's legacy?

I think it's remarkable. It's a wonderful movie, and I love the book. It's a theme that's timeless and universal, and people always identify with the things in the book and the movie. And the protagonist, Atticus Finch, represents something about the best in human nature. I think it will continue to resonate for a very long time.

Do you have a favorite scene in the film?

Yes. I love the scene when the children are in bed talking about their mother, and Atticus can hear them from on the porch: "Do you remember her? Do you love her?" 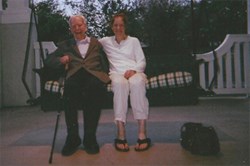