This love letter to present-day Woodstock preaches love and condemns fighting, but its platitudes render it predictable and one-sided.
Alissa Wilkinson|June 8, 2012
Our Rating

Sometimes it's clear from the get-go that a movie was made mostly for the benefit of those involved. Let's face it: some movies are just more fun to make than others. For instance, shooting a film about the Holocaust or sex trafficking, while meaningful, likely isn't a lighthearted experience.

Then there are films like Peace, Love and Misunderstanding, a sunny romp in present-day Woodstock, New York. This movie sports a pretty cast and a solid (if unoriginal) premise: parents unintentionally screw up their kids, and it's up to said children to let go of their resentment so that they can fly away like a balloon or a bird on the wing.

But a clichéd premise is perhaps forgivable. After all, this film is set in Woodstock, where a great deal of the residents still (apparently) live in 1969. The not-coincidentally-named Grace (Fonda) acts as a nurturing, grandmotherly figure to a number of them, throwing parties, reminiscing about the good days, and even leading the weekly protests on the town square to remind the government that they haven't become complacent. Grace's uptight daughter Diane (Keener) broke with her mother twenty years ago, and has since become a Manhattan lawyer, raised two teenagers, and become a Reagan-loving conservative. But when Diane's husband (Kyle McLachlan, taking a break from his recent stint on Portlandia) shocks her with a request for a divorce, Diane packs up the kids—Jake (Wolff) and Zoe (Olsen)—and heads north to mama. And Woodstock.

The simple move doesn't solve their problems. Not quite, anyhow. They each quickly encounter their perfect romantic match—including a handsome woodworker / songwriter, Jude (Morgan) for Diane and the sexy-and-sensitive butcher Cole (Crawford) ... 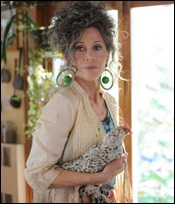