With global annihilation only days away, Carell and Knightley take to the road, hoping to be with the ones they love most at the end.
Frederica Mathewes-Green|June 22, 2012
Our Rating

The movie hadn't been on very long, but most of the funny scenes from the trailer had already flown by. I checked my watch: six minutes in. Not much later the rest of the trailer flickered past. Then Dodge (Steve Carell) pulled into his rooftop parking space at work. He leaned forward to check an insect bite on his cheek in the rear view mirror. With a shattering crash, a body landed on his windshield.

If this film is marketed as a Steve Carell comedy (the genre on IMDb is listed as "Comedy, Drama, Romance, Sci-Fi"), then people might be using the term "comedy" in a different sense than "a movie that makes you laugh."

For one thing, the film's less-than-ha-ha premise is that the world is about to end. In the opening scene, Dodge and his wife are pulled over on a darkened street, listening to the car radio. The announcer is saying that the space shuttle Deliverance has exploded in space; it was the last hope to stop a 70-mile-wide asteroid, called "Matilda," before it puts an end to life on earth. "The final mission to save mankind has failed," says the radio announcer. Matilda is "set to collide with earth in exactly three weeks time, and we'll be bringing you our countdown to the end of days, along with all your classic rock favorites."

Dodge mutters, "I think we missed our exit." His wife opens the passenger door and runs away.

Even in these first minutes you get a clue about the tone of the film. Carell looks old. In the bluish light, his jowls are heavy, and the wrinkles are deep. It's a vulnerability, in terms of appearance, that would be called "courageous" in an actress, and it's just as brave for an actor who's still competing in the comic-romantic-lead category. There is no flicker of restrained playfulness in his expression, ... 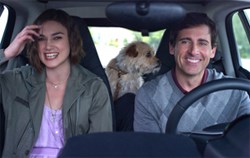