A 'Christian' band? Maybe. But the Sevens—and their album 'Sticks and Stones'—were one of the best ever.
Clay Anderson|March 28, 2012

"We're half the band we used to be," joked Michael Roe before he and bandmate David Leonhardt—playing as a duo for the first time in 15 years—started into the first song of a show on the Seventy Sevens' recent tour, supporting the re-release of their defining album, 1990's Sticks and Stones.

The statement is perhaps a bit truer than intended.

Roe's guitar chops are as good as ever, and his voice is remarkably unchanged after 30 years. But it's the bittersweet picture of watching a still-brilliant musician sing still-vital rock songs to a small crowd of largely fortysomethings, backed by a drum machine instead of Aaron Smith, passing the bucket for a love offering before the encore. The songs are still phenomenal. But the band—it's the Seventy Sevens, for crying out loud!—should be so much more.

Yet in a sense that's how it's always been with the Sevens, even in their heyday.

This is the band whose third album—intended to be their "breakthrough"—released in 1987 on Island Records just a few weeks before one of their label mates, a little Irish group named U2, unleashed a record called The Joshua Tree. Both albums met with rave reviews from Rolling Stone magazine.

One of those bands exploded. The other did not.

In the fallout, the Seventy Sevens lost two of their four members, landed back in the CCM scene where they had a fan base, and scratched together some leftover tracks for a release on Broken Records. The album was a collection of misfits and castoffs. Also-rans and runners-up. Sticks and Stones.

Yet in retrospect, that album, released in 1990, represents the high-water mark in the career of a band that Mark Allan ... 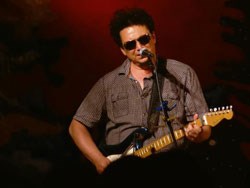