This adaptation captures the book almost perfectly. PLUS: Jesus in The Hunger Games, and a movie discussion guide.
Todd Hertz|March 23, 2012
Our Rating

Though based on a young adult novel, The Hunger Games is no fluffy Twilight. This is not a "teen movie," but a movie about a teenager—a strong character whose story deserves to be told. This is also not an adaptation hastily thrown together to capitalize on a pop culture sensation. It is a well-crafted film with genuine inspiration, creative innovation, and a defined voice—with something real to say.

This is what teen lit adaptation can look like when the subject is respected, when the audience is not being pandered to, and when the source material is a strong story. The Hunger Games is a dark and engaging action/drama laced with social critique and dystopian sci-fi. But most of all, it's the story of a girl and crushed innocence.

Jennifer Lawrence, who plays the lead role of Katniss Everdeen, described Suzanne Collins' Hunger Games trilogy as holding up "a terrible kind of mirror: This is what our society could be like if we became desensitized to trauma and to each other's pain."

We see this society through the eyes of Katniss, a 16-year-old girl in Panem, an iron-fisted society that rose from the ashes of North America's collapse. Long ago, Panem's districts rebelled against its governing Capitol—and have paid dearly for it ever since. As a painful reminder of who they serve—or as President Snow (a reserved Donald Sutherland) says, a reminder of The Capitols's generosity and forgiveness—two children, called "tributes," from each district are selected each year to participate in the Hunger Games, a fight to the death. Most tributes are selected by lottery—and the odds of getting chosen increase each time they must borrow food from the government. Some kids, in districts closer to the Capitol, ... 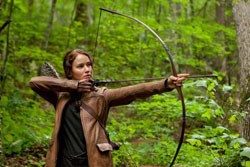