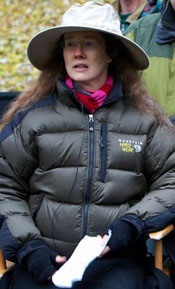 The story, set in 1948, follows Camilla—a 15-year-old trapped in the turmoil of her parents' failing marriage on New York's Upper East Side. Her mother, Rose, is childlike in her tendency to treat her daughter like a doll, and in her desire to live in a romantic fantasy. (She's having an affair with a businessman.) Meanwhile, Camilla's father, Rafferty, is withdrawn; L'Engle calls him "a glacier of a man."

Camilla, who dreams of becoming an astronomer, seeks refuge in her friendship with a spirited young woman named Luisa, and she finds escape and romance with Frank, Luisa's charismatic brother, a boy that Camilla's parents believe is "dangerous."

Filmmaker Moore believes 15-year-olds were "younger" than they are now—they were not saturated with media, and so learned about the world of adult life more slowly. Frank leads Camilla into a larger world of possibilities … and temptations. 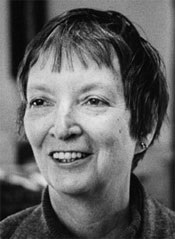 Moore sees similarities between Camilla's story and L'Engle's own accounts of childhood. "There are large parts of Madeleine's story in this story," she says. "It's tragic and beautiful and painfully awkward, the way adolescence is. It's about flailing around and … trying to find out who you are."

Camilla is also a testament to L'Engle's faith. She never considered herself a "Christian writer" (in the sense of seeking to evangelize) but a writer who happened to be a Christian. Her stories steer clear of sentimentality and sermonizing. In Camilla Dickinson's most poignant scenes, she wrestles with big questions: Are we "accidental"? Or have we been planned? If there is a God, why does he allow bad things to happen? And what is expected of us?

"All of Madeleine's beautiful work is so full of light," says Moore. "We need more films that are full of light. I wanted to get this film made in a way that Madeleine would really love, to honor her."

'Gobsmacked' by a Great Cast

Moore found an accomplished producer in Larry Estes (Smoke Signals, The Heart of the Game), who says he appreciated Moore's "singleness of purpose about telling the stories she wanted to tell." When casting directors Kerry Barden and Paul Schnee (The Help, WinWin) joined the effort, the floodgates opened.

"We were humbled, overwhelmed, gobsmacked by how many people responded to this story," Moore says. "We were inundated with resumes and phone calls and agents and people who wanted their actors in this. We couldn't believe it when Cary Elwes walked through the door." 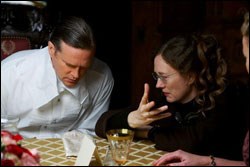 Elwes, most famous for playing Westley in The Princess Bride, plays Camilla's father, Rafferty. He says the project drew him in with its story of faith, coming of age, and romance—something that rarely gets the attention of studios anymore. "The only way a studio can even look at a romance is when it's 'Two goofballs finally find each other!' But what's wrong with real love, with real passion, with real feelings?"

To play Rafferty, Elwes took inspiration from people he has known who have suffered a loss of faith, who have "withdrawn into shells." But, he adds, "I had to find the empathy within the guy too. Even if you're playing someone who is without remorse, you have to find something that people can connect with on a deeply human level. I think I found it in [Rafferty's] love for his daughter."

Elwes was moved by the way Camilla's growth in faith and confidence brings hope to her parents' failing relationship. "That's what's so beautiful about it—it's Camilla who's grown up so quickly in the story and ends up teaching them a thing or two."

Samantha Mathis (TV's Curb Your Enthusiasm and Grey's Anatomy), who plays Rose, brings a "sweetness and vulnerability" to a character that could easily have been a villain, says Elwes. Rafferty, he adds, is not blameless in Rose's affair. "She's got nothing at home. He stopped watering that plant a long time ago."

The film also stars television's Robert Picardo (Star Trek: Voyager) and Camryn Manheim (The Practice) as a married couple whose joyous way of life is a reminder of L'Engle's own embrace of God's good gifts. Frank, played by Gregg Sulkin, is endearing, if a bit idealized, as Camilla's love interest. But his sister Luisa almost steals the show, played with spirit by Colby Minifie, who resembles a young Joan Cusack. 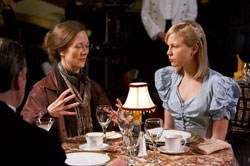 The most sought-after part was, of course, the lead. After investigating "nearly all of the young working actresses in Hollywood and New York," Moore and her team chose Adelaide Clemens, an Australian actress who has already appeared in X-Men Origins: Wolverine, HBO's The Pacific, and on television's Lie to Me.

"The minute that Adelaide opened her mouth, we looked at each other and said, 'Thank God!'" says Moore. "She did the reading, and when she left the room, we did a 'happy dance.'"

The happy surprises didn't stop there.

Many of Moore's new collaborators opened up to her about their own Christian faith. Moore was stunned "to be having theological discussions while sitting in the captain's chairs on the set." Several were quick to ask where they could attend mass before getting to work.

Elwes says he's "drawn to material that has some social or religious quality to it, that has something to say. I played [a young] Pope John Paul II in TV movie a while back. I had allowed myself to become something of a lapsed Catholic, and it really reconnected me with my faith and my individual belief in Christianity."

Moore believes there are "many, many people" in Hollywood who are open to—even enthusiastic about—material that engages faith-related themes. But, she adds, they are "starving for good material."

L'Engle's influence is evident even in the name of the production company behind the film—Kairos Productions. Kairos, L'Engle explains in Walking on Water, is a Greek word that describes non-chronological time, God's time, a "time outside of time." 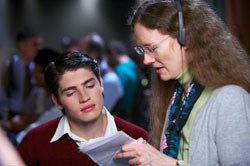 Actor Greg Sulkin on the set with Moore

Kairos movies have "heart, soul, and spirit" because Moore herself does. Just ask Elwes: "Unfortunately, my industry is still very much an old boys' network. Corrie's the first woman director I've worked with, which I was very thrilled about. She has an incredible, beautiful spirit about her. She has a very delicate touch."

Her producer agrees. "In the independent film business," says Estes, "it's largely about being cutting-edge, pushing the envelope, being extreme, seeing how bad things can get, how depraved villains can be. So it's pleasant for me to work on something that's more about people trying to become better people."

Moore praises the Act One: Writing for Hollywood program, where she learned and grew, and the Hollywood Prayer Network. Though HPN, two women "have been praying for me for ten years. And I have a team of prayer partners listed in the credits of my movies. I am deeply in their debt, and I love them."

Now she and Kairos are focused on finding an audience.

"We need to get it to the right festivals that will attract the right buyers who will launch it into the universe," says Moore. "That is my prayer, that it will find the right spiritual home, with the right people to represent it."

Whatever studio does rise to the occasion will be giving moviegoers a gift. In Walking on Water, L'Engle says we draw people to Christ "by showing them a light that is so lovely that they want with all their hearts to know the source of it."

Camilla Dickinson is not a flashy, noisy movie. But it is full of the light that L'Engle reflected in her work. It's easy to imagine that she is watching Moore's progress and smiling.

Photos (except L'Engle) by Pete Moroz, courtesy of Kairos Productions.