Actor defends his comments to CNN about gays while talking up his new documentary.
Andrew Thompson|March 26, 2012

Kirk Cameron, 41, is far from his days as TV teenage heartthrob Mike Seaver in Growing Pains. But he has not left the media world behind, nor has he been idle. Cameron starred in several of the Left Behind movies, and more recently in the Christian film Fireproof. He is also co-host (with Ray Comfort) of the TV-and-radio ministry The Way of the Master, and is the father—with his wife of 21 years, Chelsey Noble—of six kids.

Busy guy. But not too busy to make a new documentary—or to make the news, as he did recently with his comments about homosexuality on CNN.

Cameron's new documentary, Monumental, traces America's founding back to the Pilgrims. It releases Tuesday (March 27) as a "live event" in more than 550 U.S. theaters, and due to demand, more screenings being lined up for the weekend.

Cameron came under fire for comments in an interview with Piers Morgan on CNN, where he defended traditional marriage and said homosexuality was "unnatural" and "destructive" to society. Cameron has since clarified his views on the Today Show, saying he's not a bully and that he loves "all people."

CT spoke with Cameron about the release of Monumental, the history (and current state) of America, and the firestorm surrounding his comments on CNN.

What got you started on the Monumental project?

I approached this film not as an actor or a politician, but just as a dad with six children. The world they're growing up in is rapidly changing, and it's heading in a direction that is not good. Financially, we're $16 trillion in debt. Morally, spiritually we're spiraling downward. We're in the vortex and we're about to get flushed down the drain. I turn on the news and say, "What can we do about this?" 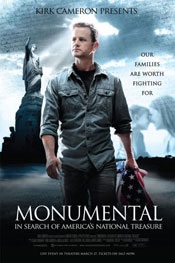