For a movie based on a board game, it's not half bad—and a pretty fun, patriotic romp.
Brett McCrackenMay 18, 2012
Our Rating

"Transformers-meets-Pearl Harbor." That's how I imagine the pitch went to make a film version of Battleship—based on the classic Milton Bradley board game—and it's also pretty accurate as a description of what this film turns out to be. Imagine Transformers' whiz-bang machinery-of-death loudness set against the "aw shucks" nostalgia and patriotism of Pearl Harbor (sans the insufferable love triangle), starring the cast of Friday Night Lights. That's pretty much Battleship. And you know what, as dumb as it is, it's actually pretty fun to watch.

What, after all, does one expect out of a summer blockbuster whose source material is a children's board game, "recommended for ages 7 and up"? Certainly one wouldn't expect it to be anything that a seven-year-old couldn't understand (nuance) or would find boring (too much talking or character development). No, what we would expect is this: lots of explosions. LOUD explosions. The kind that rattle your ribcage. And also guns, missiles, torpedoes, cyborg aliens, spaceships, hand-to-hand combat, freakishly violent alien shredders, falling skyscrapers in a major world city (Hong Kong), lots of American flags, Hawaiian sunsets, and a pop-star in a supporting actor role (Rihanna).

Battleship has everything it needs to have (namely: a huge special effects budget), and it wisely avoids trying to be much of anything else. The story is refreshingly uncomplicated (why do so many high-octane testosterone blockbusters ruin themselves with complicated plots?), following the standard "aliens-attack, humans fight back and save the earth" trajectory. In this case, the humans who save the day are sailors of the U.S. Navy, led by lieutenant Alex Hopper (Taylor Kitsch, aka "Tim Riggins" of ...

Join in on Facebook
Tags:
None
Posted:
May 18, 2012
More From:
Brett McCracken 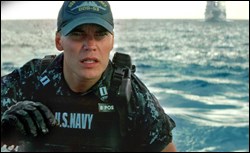