It's not like John Schneider is embarrassed about his run as the dashing, daring Bo Duke on the 1980s smash TV hit The Dukes of Hazzard. He remembers those days fondly, and appreciates the show's loyal fans. He even gladly mugs for photos, flashing that warm smile when 40-something women—who idolized him as teens—approach him with their old Tiger Beat magazines, seeking an autograph and a hug.

Schneider, still ruggedly handsome at 52, is okay with all that. He just doesn't want that one TV gig, three decades ago, to define his entire career.

"Every time somebody starts out, 'You know him best from The Dukes of Hazzard,' I just want to strangle them," Schneider says with a laugh. "I did a couple of radio interviews recently, and one guy said, 'We got Bo Duke on the line!' So there I am, on live radio, and I said, 'Really? Is that right? That's who you have on the phone right now? I'll do 'Yee haw!' for you later, but right now, let's talk about October Baby.'"

So we won't begin this story with Schneider's days with the Dukes. (We don't want to get strangled.) We'd rather talk about October Baby anyway … and a handful of other faith-based, life-affirming films starring Schneider in recent months. And how, remarkably, several of those movies mirror his own journey.

Take October Baby, for starters. A surprise indie hit (made for a reported $1 million, it has earned more than $5 million in two months in limited release), the film stars Schneider as the father of a 19-year-old girl who learns that she is not only adopted, but the survivor of a botched abortion. Her quest to find her biological mother yields a story rife with forgiveness and healing.

As it turns out, Schneider's own family saga has some similarities ... 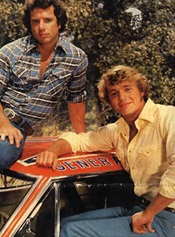