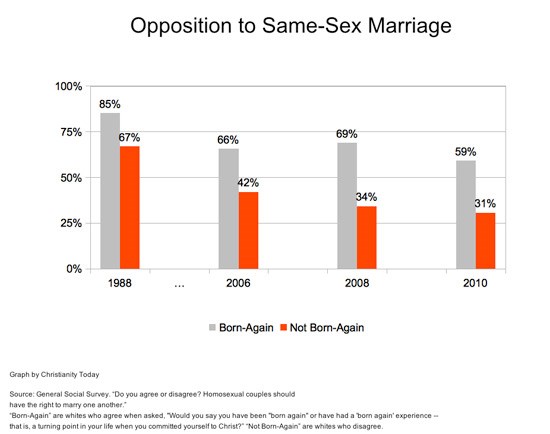 The federally-funded General Social Survey has asked about the public's views toward homosexual relationships for decades, revealing how attitudes have shifted over time. In 1988, the two-thirds of white Americans believed that "sexual relations between two adults of the same sex" was "always wrong," including 85 percent of born-again Christians. By 2010, both groups began to accept same-sex relationships. Born-again Christians still opposed homosexuality, but they answered the questions the same way non-believers answered in the 1980s. In 2010, two-thirds of evangelicals believed that homosexuality is "always wrong," compared to just 30 percent of others.

Washington Post columnist Mike Gerson noted that social conservatives may need to frame marriage differently due to the generational shift.

"In much of the country, social conservatives may need to choose a more defensible political line — the protection of individual and institutional conscience rights for those who disagree with gay marriage," he wrote. "It is also a commitment of genuine pluralism to allow those with differing moral beliefs to associate in institutions that reflect their convictions." 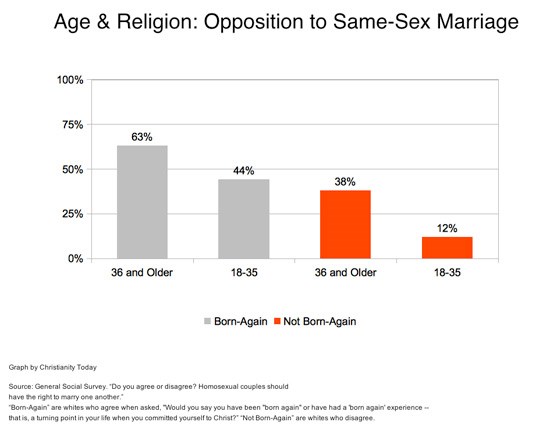 With changing attitudes toward homosexuality comes greater acceptance of same-sex marriage as a legal right. When the survey asked in the early 1990s if "homosexual couples should have the right to marry one another," most Americans disagreed. By 1998, however, attitudes began to change. Opposition among evangelicals dropped from 90 percent to 76 percent within the same decade. The drop among non-evangelical white Americans fell from 68 percent to 46 percent. In 2010, those disagreeing that gay couples have a right to marry shrank further. Still opposed, two-thirds of evangelicals disagree that gay couples have the right to marry, compared to three in ten of other Americans.

A recent poll from LifeWay Research asked, "Do you believe homosexual behavior is a sin?"Overall, Americans are evenly split with 44 percent saying yes, 43 percent saying no, and the remaining saying they are not sure. Among evangelicals, however, 85 percent said "homosexual behavior is a sin." The LifeWay poll also asked whether knowing that a church taught that homosexuality was sinful would make people more or less likely to attend. Half of those who believe homosexuality is sinful said that they would feel more positively toward a church that believed homosexuality was sinful.

LifeWay Research director Scott McConnell said the decision to use the word "sin" was intentional. A poll asking about sin is different from asking whether homosexuality is wrong.

"When asking questions like this to a general sampling of the population, it is important to note that people's definition of 'sin' may differ based upon their religious background and beliefs," McConnell said. "We intentionally used the word, but also know it means different things to different people."

Wednesday's announcement brought immediate analysis of potential political impact among voters and donors. Seven of nine presidential election swing states have laws or constitutional provisions that prohibit same-sex marriage, according to The New York Times. And a few states, like Maine, Minnesota, Washington, and Maryland, are expected to vote on marriage-related measures in November. Within 90 minutes of his interview, Obama raised $1 million, as Romney could unite the social conservative base.

After Vice President Joe Biden's comments supporting same-sex marriage, forcing the President's hand, he apologized for hastening him into his endorsement. Since Obama's announcement, top Republican leaders have tried to steer the political conversation back to the economy as they have been in recent weeks. The GOP's House and Senate campaign committees sidestepped the issue as prominent Republican strategists warned leaders to stay away from it, according to Politico.

Republican presidential candidate Mitt Romney said Thursday that he believes gay couples should be allowed to adopt children as he reiterated his position that marriage should be between a man and a woman. Romney's openly gay foreign policy spokesman resigned earlier this month after critics questioned his appointment.

"If two people of the same gender want to live together, want to have a loving relationship, even want to adopt a child—in my state, individuals of the same sex are able to adopt children," he said. "In my view, that's something which people have the right to do, but to call that marriage is, in my view, a departure from the real meaning of the word."

Obama's shift threw a spotlight on the Defense of Marriage Act, the law that defined marriage as between a man and a woman. On Wednesday, the House passed a measure aimed at the act, voting to stop the Justice Department from using taxpayer funds to actively oppose DOMA. Last year, the administration announced its decision to stop defending DOMA in court, saying the act is unconstitutional. Senate Majority Leader Harry Reid suggested Thursday that Democrats could attempt to repeal DOMA. It would not stand a chance passing through a divided Congress.

Religious liberty observers have noted that the Obama administration's actions in the past year have touched on sexual orientation, from hiring rights to federal funding issues.

As several observers have noted, Obama emphasized his view that same-sex marriage is a state's right issue and that he doesn't want to "to nationalize this issue" by committing to something like making same-sex marriage a right protected by the federal Constitution.

ABC's Robin Roberts asked Obama, "Can you ask your Justice Department to join in the litigation in fighting states that are banning same-sex marriage?" Obama responded, "Well, I—you know, my Justice Department has already—said that it is not gonna defend—the Defense Against Marriage Act."

The Obama administration is not taking an active role in the effort to define marriage nationally through challenges for or against same-sex marriage, as the federal government has not joined in the challenge to California's Proposition 8, defining marriage as between a man and a woman.