Although this ensemble comedy is crass and sometimes emotionally confused, a strong cast and an irresistible theme ultimately deliver.
Carolyn ArendsMay 18, 2012
Our Rating

A perennial bestseller since its release in 1984, the pre-natal manual What to Expect When You're Expecting reassuringly catalogues the myriad physical and emotional changes common to pregnancy; owning the book has become a rite of pregnancy passage itself for expectant parents. The filmmakers of the new ensemble comedy of the same name do all they can to mine the universal experiences of impending parenthood, with needlessly vulgar, but often funny and occasionally heart-warming results.

What to Expect When You're Expecting, the movie, chronicles the baby-related adventures of five loosely interconnected couples. Celebrity trainer Jules (an astonishingly fit Cameron Diaz) and professional dancer Evan (Glee's Matthew Morrison) meet on a Dancing with the Stars-type show. When they discover they are going to have a baby, their initial apprehension turns first to happiness and then to conflict when the fiercely independent Jules wants to make all the key decisions (like whether or not to circumcise) on her own.

While Jules and Evan live out their baby-drama in LA, four other couples deal with impending parenthood in Atlanta. Wendy (30 Rock's Elizabeth Banks) is a baby-expert and author who has never actually had a baby; when she and husband Gary (Bridesmaids' Ben Falcone) finally do conceive, the 'glow" Wendy has anticipated for so long is lost in an unceasing tide of hormones and nausea. At the same time, Gary's relentlessly competitive race-car driver father Ramsey (Dennis Quaid, having good-natured fun with a rather one-dimensional role) is once again one-upping his son by expecting twins with his much younger wife Skyler (swimsuit model Brooklyn Decker), who intensifies Wendy's misery at every turn by exhibiting none of the ...

Join in on Facebook
Tags:
None
Posted:
May 18, 2012
More From:
Carolyn Arends 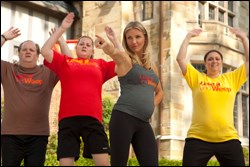