Tim Burton returns to form—and his roots—with a story about a boy who brings his pet dog back to life.
Russ Breimeier|October 5, 2012
Our Rating

Many reviews of Dark Shadows earlier this year (including ours) rightfully noted how writer/director Tim Burton has become a shadow of his former self. Recent films have merely adapted stories to his uniquely whimsical, gothic style instead of offering something that's truly all his own. Consider Frankenweenie a complete return to form—no surprise since it resurrects two of Burton's earliest creations from the '80s.

While working as an animator at Walt Disney, Burton released three short films, his last being 1984's Frankenweenie. Paying homage to the 1931 classic Frankenstein, the 30-minute production told the story of a boy who brought his dog Sparky back to life after a car accident. Disney considered the project too dark/scary/demented for children at that time and Burton was promptly fired. The film was still shown in the UK and eventually released on video after Burton rose to prominence with Pee Wee's Big Adventure, Beetlejuice, and Edward Scissorhands. 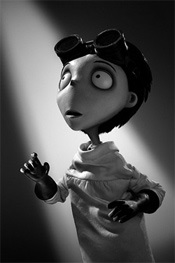 Now Burton has revived and reconceived Frankenweenie as a 90-minute animated feature. And if Sparky the dog looks somewhat familiar, then you probably remember "Family Dog," an animated short from 1987 and a short-lived series in the early '90s. Burton designed that cartoon canine as a conical-nosed bull terrier, and he brings similar art direction to this feature.

The story remains true to the original's loving parody of Frankenstein—call it Very Young Frankenstein. Victor (naturally) is a boy genius in the small town of New Holland, which looks a lot like other Burton worlds with its hodgepodge of '60s chic and spooky residents. People and animals alike have dark circles around their eyes, some more bulgy than others. Lightning storms are frequent. TVs broadcast Christopher Lee's classic Dracula films. And the science-obsessed kids at school respond to all of this as just another day. The Twilight Zone? More like Edward Scissorhands crossed with The Nightmare Before Christmas.

Victor is a loner who mostly keeps to his attic lab with his best friend Sparky, creating projects to impress his kindly parents. But when a tragic car accident takes Sparky's life, Victor loses his will to invent—until his science teacher demonstrates in class how electrical current can reanimate a dead frog. Victor attempts a similar experiment at home on a grander scale, utilizing lightning and the body of his beloved dog (not to mention a lot of electrical Frankenstein equipment of his own).

Of course the experiment works and we have a movie, though Victor realizes he needs to keep the miraculous resurrection of Sparky a secret. But classmate Edgar "E" Gore discovers the truth and wants to try the lightning experiment himself on another animal. Before long, the whole class is trying to win the science fair with similar projects, only to learn that their carelessness with science has dire consequences.

Frankenweenie offers some surprises but ultimately plays predictably. What may have been a novel idea in 1984 today seems trite after 25 years of cable television and animated shows that have offered their own Frankenstein parodies. A lot of the details from 1931's Frankenstein now play as cliché because it's been done so much.

Stemming from that is the bigger issue: who is the target audience? Adults will likely find the story overly routine, if not juvenile. And it's too scary for many younger viewers (see Family Corner below). Is your child ready to see a movie that grapples with the idea of losing a pet? Do you want your kids seeing other kids casually messing with electricity? Are they ready for an old-fashioned monster movie with some "ooga booga" moments?

But because this is classic Burton, the uneasy mix of dark comedy and wholesome sweetness works. If your family enjoys Nightmare Before Christmas and Burton's underappreciated Corpse Bride, this is pretty similar in tone, with its creepy crawlies and minor scares. Frankenweenie provides both without pushing the envelope in a lovable story about a boy, his dog, and his well-intentioned parents. 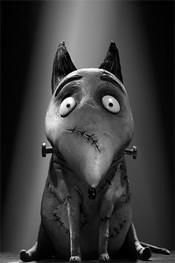 Burton also excels at telling a familiar tale in a fresh way. Clever details keep Frankenweenie engaging for adults—the realistic behaviors of the dog, the tombstones in the graveyard, the science teacher's crazy explanation of lightning to his class (and, at a town hall meeting, a crazier explanation for teaching science). The story may be expected, but the details are unexpected.

There's also excellent, intelligent use of stop-motion animation. In the particularly clever opening, Victor shows his parents a crudely made Super 8 sci-fi movie, demonstrating the most basic principles of stop-motion animation, but contrasting with the film's state-of-the-art stop-motion at large. Like other movies of this kind, it's easy to wonder how everything is done with puppetry, especially fire and water.

The Frankenstein metaphor is all too apt. It's comprised of old, familiar pieces that seem a little worn. And yet, with mad scientist Tim Burton in charge, there's just enough wit and spark to proclaim, "It's aliiiive!"

Frankenweenie is rated PG for thematic elements, scary images, and action. Whether kids are ready for it could be gauged by their response to Tim Burton's Nightmare Before Christmas, classic monster movies like Frankenstein and Dracula, and the prospect of having a pet die. There are a lot of dead animals in this movie, many of which are brought back to life through (irresponsible) children's experiments involving electricity. Some of the creatures will be scary for little kids, including a surprise "gotcha" moment and a subplot reminiscent of Gremlins. Even some of the townspeople look a bit menacing in their art design with their teeth and eyes. All that, plus some cat poop played for laughs. Still, the film is wholesomely entertaining in its own twisted way.