A drama that reveals the tough realities of sex trafficking—a bit too safely and blandly.
Camerin Courtney|October 5, 2012
Our Rating

Raising awareness about social problems is an important and tricky business. The general public needs to know about societal ills such as government corruption, environmental decay, sex trafficking. But how do you get audiences to show up for something so difficult and potentially depressing? And many of these films, documentaries and fictionalized dramas alike, leave me with a huge lingering question: What now? Now that I'm aware of the problem, what am I supposed to do with this knowledge?

Trade of Innocents, the latest entry in the awareness-raising genre, takes us to Siem Reap, Cambodia—home of international tourist destination Angkor Watt—to expose something unholy happening the shadows of this ancient temple. There we follow Alex (Dermot Mulroney), a human trafficking investigator somehow associated with the U.S. government, as he works in concert with locals and officials from other countries. His goal, as he tells the new police chief, is to "shut down every brothel in the city that exploits children in the sex trade." 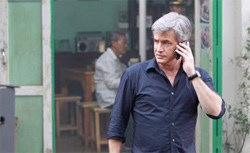 While Alex is at work, his wife Claire (Mira Sorvino; our interview) volunteers in a local shelter for girls rescued from the sex trade. In working with these young survivors, Claire comes to grips with her own ordeal, the loss of her young daughter a few years prior—a grief she still yearns to process with her stoic, driven husband.

Alex's main target is Duke (Trieu Tran), a pimp who plucks girls as young as 7 years old from the local neighborhoods to whet the appetites of local customers who are under the mistaken notion that sex with a virgin can cure them of AIDS, and international johns who desire girls who are "less used." In the film, the johns are mainly represented by Malcolm (John Billingsley), a wealthy U.S. businessman who is trying to buy the services of a 7-year-old virgin for a month. He is willing to pay upwards of $30,000 for this "young, fresh-cut flower."

For this request, Duke has his sights set on Amy (Thawanrat Tantituvanont), a Cambodian girl raised in the U.S. who has just come to the area to live with her grandpa following the death of her mother. Claire's friendship with Amy puts Claire in harm's way as well.

The plot is well conceived enough—if only the execution were as good. While Mulroney is convincing as a government worker—disciplined and necessarily emotionally distant—he's a little too stoic. He makes Alex seem flat, one-dimensional. Claire is a bit too vulnerable and fragile to be adapting to life in Cambodia seemingly so easily. The bad guys are all evil and twisty. The young girls are mostly playing with sock puppets and drawing pictures of flowers. It's all a little too black and white.

But the biggest problem is the stilted dialogue many of the characters are given. In Alex's first conversation with the new local police chief, it seems like he's reading from an anti-trafficking brochure: "It's about changing the fear equation so that women and girls trapped in the sex trade don't have to live in fear. The pimps should live in fear. It's about supply and demand. Cut off the supply and prosecute those who demand." This is educational, but not believable as a real conversation—especially with Mulroney's dispassionate delivery.

Even Cambodia seems a bit sanitized and colorless here. I've been to Phnom Penh and other cities in Southeast Asia. While the filmmakers have captured well the cramped housing and the families of five riding around the city on motorbikes, there's a grit missing—the dusty streets, the dirt that lingers in the humid air, the vacant stares of those who have only known abject poverty.

In reviewing several films about sex trafficking over the years, I've noticed that the filmmakers seem to take one of two approaches—showing disturbingly graphic scenes of violence and sexual assault in order to force audiences to understand the horrors, or keeping the disturbing violence and vulgarity implied so that viewers aren't tempted to look away from the uncomfortable realities of trafficking.

Trade of Innocents takes the latter tack. Violence is implied and off screen. Subsequent wounds are vague smears of blood on face and forearm. I appreciate not having to endure the graphic rape scenes in other films about trafficking, but some of the real danger and fear seems missing here. Even the fight and chase scenes are a bit safe and amateurish. I don't quite believe people are in real danger.

Both approaches to trafficking films—salacious or safe—seem to have the same goals: raising awareness and moving audiences to do something. Trade of Innocents states this goal very clearly on the closing screen of the film with the words: "Justice Needs a Hero. Be One." And it points viewers to the "Justice-Generation" website for action steps, suggesting practical ways that one can get involved in the fight.

Trade of Innocents is rated PG-13 for disturbing thematic material involving sex trafficking of children, and some violence. We never see any sex acts and the violence is mostly implied. One of the teen girls in the sex trade is killed, but her death is off screen. Given the fact that the people being trafficked here are young children, it would likely be disturbing for all but older, mature teens and up. For them, this is a relatively clean enough film to raise awareness of a tough subject.