Does the world need another screen adaptation of Emily Brontë classic 1846 novel, Wuthering Heights? Arguably no. But writer-director Andrea Arnold's effort is no mere run-of-the-mill adaptation. It's a bold, unique, gorgeously made film that manages to be at once thoroughly contemporary and elegantly throwback. It's a breath of fresh, moist English air in a narrative that typically gets the staid, overly corseted Merchant Ivory treatment.

Arnold (Fish Tank, Red Road) applies her unique aesthetic vision to the source material, even while she remains relatively faithful to book's plot. The story, a bleak Gothic romance set against the windswept, turbulent moors of North Yorkshire, England, concerns the star-crossed romance between Heathcliff and Catherine ("Cathy"). The film opens when Heathcliff—a mysterious boy whose backstory is never told—is taken in by Mr. Earnshaw, a Yorkshire farmer and father to a short-tempered son (Hindley) and a free-spirited daughter (Cathy). Soon Heathcliff and Cathy forge an intimate friendship that becomes something more as they grow up together, playing in the muddy, craggy, dramatic landscapes of the moors. Things get complicated for Heathcliff and Cathy as the expectations of class and culture intrude on the dreamscape of innocent young love. As they grow into adulthood they experience the painful ramifications of the dark side (jealousy, passion, bitterness) of their ill-fated love. 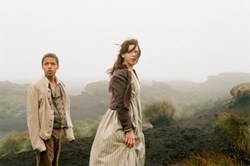 Though Arnold's film (in limited theaters) doesn't encompass the full narrative timeline of the book, it does cover much of the central drama surrounding Heathcliff and Cathy, without ever feeling rushed, thin or unsatisfying. English teachers and literary purists may object to the film's unorthodox aesthetic choices—among them, a shocking, Malick-esque scarcity of dialogue—but the beauty of cinema is that so much can be communicated through moving images: the evocative facial gestures and physicality of a good actor's performance; the quiet beauty of the golden autumn light playing off of a horse's auburn mane; the unsympathetic landscapes and brutal weather literally pounding in sheets of wind and rain on the rickety walls of an aging homestead.

Interestingly, Arnold's eye seems almost more taken with these sorts of details (place, context, nature, visceral observance) than with things like plot exposition and character development. The film achieves that rare, tactile place where—through the stunning cinematography of Robbie Ryan (Fish Tank)—one can almost feel the wetness of the fog, fields and mud, or the softness of feathers and fur. The prevalence of sweeping vistas, all manner of weather (snow, sun, rain) and an impressive sampling of the animal kingdom (dogs, bugs, rabbits, birds, horses, etc.) all contribute to the unique tenor of this version of Wuthering Heights. It's a film where the romantic ambience and "love can be destructive" themes of the book are rendered visually, through images of a world that is at once magical, renewing, and transcendent and foreboding, desolate and uncaring. Arnold's decision to shoot in 4:3 aspect ratio rather than 16:9 also highlights this detail-oriented focus on portraiture and "human's eye view" composition, where vertical lines (big sky, birds, trees) are just as important as horizons and vistas. 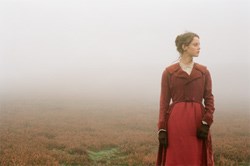 Kaya Soldelario as the older Cathy

This is not to say the actors play second fiddle to images of nature (ubiquitous as they are); the performances by the four actors playing Heathcliff and Cathy at various ages are exceptional—especially James Howson's brooding turn as the older Heathcliff. One of the immediately striking choices by Arnold is the decision to cast black actors to portray Heathcliff, though in the context of the book (where he is described as a "dark-skinned gypsy in aspect and a little lascar") it makes sense. Among other things, Wuthering Heights is a story about class mobility and the sometimes explosive intermingling of cultures and perspectives. Heathcliff is the story's central outsider—a man of ambiguous origins and motivations whose dramatic arc of change (not necessarily for the better) is one of the most interesting parts of the film. We see the world through Heathcliff's eyes, quite literally. As he rides behind Cathy on the back of a horse, her hair blows into the camera's lens and we understand why he is immediately enchanted. We see him peek through his fingers or peer through cracks in the door, as he quietly, unemotionally observes the goings on of the Earnshaw and Linton families.

None of the characters in Wuthering Heights are especially sympathetic. Each has severe flaws and is tragically drawn into the worst aspects of passion, ambition, and pride. Arnold's film thus has unavoidably bleak, depressing undertones. And yet the beauty of her imagery and the compelling evocation of love's constructive and destructive power makes for an engrossing cinematic experience. The dramatic English landscapes, earthy colors and costumes, undulating camera work and lack of a soundtrack (save for one well-placed Mumford & Sons song in the film's final moments) imbue Wuthering Heights with an organic rawness as well as a deep sense of place and time. Unlike the pop-ironic anachronism of a film like Sofia Coppola's Marie Antoinette, Arnold's rendering of eighteenth century Yorkshire feels incredibly true. One feels the Englishness and romanticism of the setting so clearly in the film, lending a vibrancy and tangibility to Brontë's memorable pages. 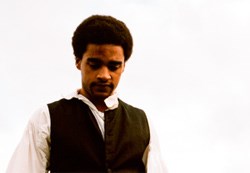 James Howson as the older Heathcliff

Though the slow pace and "look, there's a bird!" visual style might prove challenging to viewers, Wuthering Heights will likely linger in memory much longer than the average film. Arnold's decision to remove any musical soundtrack, as well as her choice to shoot with the more claustrophobic 4:3 aspect ratio, allows the emotional tumult of the story to pound us as forcefully as the sheets of rain so often pounding the windows in the film. It leaves one rather affected, even drained. We may not sympathize with the specific characters and choices in this story, but we recognize the universality of the way that love, in the context of human nature, so often brings both rapturous joy and devastating heartbreak.

Wuthering Heights has not been rated by the MPAA. It's relatively clean for a movie about passion, jealousy, and love triangles. There is one scene of a couple having sex off in the distance, but Heathcliff and Cathy never have sex in the film. There are a few brief glimpses of nudity, but they are quick and shadowy. The threat of violence pervades the film, but aside from a few scenes of Heathcliff being beaten, and beating himself up during a time of sadness, the violence is pretty tame. A couple f-words also dot the script.