We asked key leaders which Christian women are most profoundly shaping the evangelical church and North American society. This is who they picked.
October 19, 2012 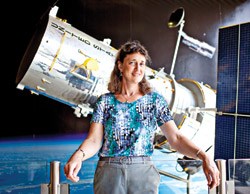