New memoir addresses abusive childhood, a wild ride with Creed, a near suicide attempt, and, finally, getting right with God.
Mark MoringSeptember 18, 2012

The last time Christianity Today talked to Scott Stapp, Creed, the popular rock band he had fronted for nearly a decade, had just broken up after years of internal bickering.

It was the summer of 2004, and while his three bandmates went off to form their own group, Alter Bridge, Stapp pursued a solo career and, by his own reckoning, God. Fans had long speculated about Stapp's faith, but he was never very vocal about it because Creed didn't want to be pigeonholed as a "Christian band." But in that conversation with CT, Stapp came right out and said, "I am a Christian." He had just watched The Passion of the Christ and recorded a song for an album inspired by the film.

But shortly thereafter, Stapp started making news again for the wrong reasons. He got into a drunken brawl in a hotel lobby. He showed up intoxicated for a TV interview. Even after marrying a Christian woman in 2006, he was arrested for public drunkenness on the day after his wedding. A year later, he was arrested for domestic abuse after a night of partying; his wife, Jaclyn, dropped the charges after Stapp publicly apologized.

Today, Stapp has been sober for just over one year, and he's telling his story in a new memoir, Sinner's Creed (Tyndale), to be released October 2. In the book, Stapp confesses his many misdeeds and how he is now right with God. But he also reveals a troubling family background. When Scott—born Anthony Scott Flippen—was 8, his single mother married Steve Stapp, who was emotionally and physically abusive, according to Scott.

The singer writes that Steve Stapp told him God made man as "priest and prophet of the household. I make ... 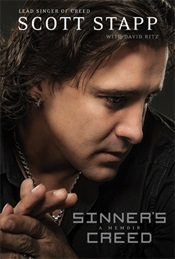