"If you figure out a way to live without a master, any master, be sure to let the rest of us know, for you would be the first in the history of the world." These are words spoken by one character to another in a pivotal scene near the end of Paul Thomas Anderson's The Master, and they represent a key idea in the film: Do we flourish more when we are completely free and self-directed, or when we are subject to a master (or a mastering narrative/philosophy/religion)?

The Master—sprawling, cryptic, masterfully made—raises this question in provocative fashion, under the guise of a film about the early days of Scientology and its founder, L. Ron Hubbard. Philip Seymour Hoffman plays the Hubbard role—a character named Lancaster Dodd, the leader of a pseudo-scientific, self-help program called "The Cause." Dodd is known by his adherents as "Master," and indeed, "mastering" oneself is the primary doctrine that he teachers. Like Scientology, The Cause teaches that human spirits (in Scientology: Thetans) are trillions of years old, reborn repeatedly in various "vessel" bodies. Through a therapy-type practice they call "processing" (in Scientology: "auditing"), these beings are able to purge themselves of the traumas, baggage and animal behavior that keep them from progressing to their perfect state. The goal is complete self-mastery, where "psychological" issues and even health problems are cured through focused mental processing.

Hoffman's Lancaster Dodd is meant to represent Hubbard in the earliest days of Scientology, during postwar America in the early 1950s. In the film he is ... 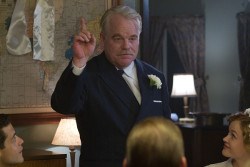