A compelling look at grief and guilt and the wonderfully horrid experience that is high school.
Camerin Courtney|September 28, 2012
Our Rating

Starting high school is traumatic enough without a tragic loss, a mental breakdown, and other baggage in your recent past. But this is what accompanies Charlie (Logan Lerman) on his first day as a freshman in 1990s Pittsburgh.

Ill-equipped to handle this trauma, Charlie's old friends, and even his older sister, barely acknowledge his presence, and so Charlie is relegated to the worst of all high school hells: sitting alone at lunch. Only 1,384 more days of high school to go, he writes to an obscure stranger—a plot device that peppers the film.

At a school football game soon after, Charlie makes nice with Patrick (Ezra Miller), the lone senior in his freshman shop class. Exuberant, witty, and openly gay, Patrick soon takes Charlie under his wing and into his orbit of misfits, who are all suffering from their own dramas and shady pasts. Charlie helps them with academics, and they involve him in their indie music fanzine, Rocky Horror live drama shows, and, most importantly, their tight-knit, quirky community. Together they all enjoy the gift of being unfazed by one another's brokenness.

Within that group, Charlie falls hard and fast for Sam (Emma Watson), Patrick's half-sister, a senior who is still trying to live down the sexual reputation she gained during her freshman year, a past she now regrets. While she dates someone else, she and Charlie become close friends, and he yearns for her with all the exquisite pain of a first love.

The rest of the group is chock full of drama. Perhaps too much drama. There's the shoplifter, the gay guy dating the closeted football player, and the angry, feminist Buddhist. There's sexual abuse, depression, homophobia, and psychotic blackouts. All within this community of six high schoolers. ... 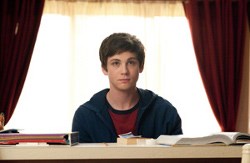