This St. Augustine biopic is memorable more for its subject's merit than its own.
Tim Avery|September 12, 2012

A few years ago, a made-for-TV film about the life of Augustine was broadcast in Italy. Now, a modified version of that film—in English, and trimmed down from 200 minutes to 130—has been released under the title Restless Heart: The Confessions of Augustine.

The film begins in 430 AD, at the end of Augustine's life with his city, Hippo, under siege, and shows the story of his life through a series of long flashbacks. We see Augustine's humble beginnings in the north Africa town of Thagaste, his plunge into debauchery in Carthage, his early vainglorious pursuit of a career in rhetoric, his life-changing encounter with Ambrose of Milan, and of course Monica, his devoted and prayerful mother.

The acting is solid—Alessandro Preziosi makes for a distinguished-enough Augustine—and the sets and costumes for this period piece, if simple, aren't bad either. The overall tone of the script and direction is, in contrast to many American made-for-TV productions, refreshingly understated. It appears as if the film's scenes were originally shot in multiple versions, with the actors speaking both Italian and English, because even though the actors' voices are dubbed in this English version, their mouths still match the words, which is a welcome non-distraction. Nevertheless, there is not much elegance here either, and the film's flatness and occasional hokiness won't make you forget that this is a lower-budget production.

The historical merit of Restless Heart is a mixed bag. It does cover a number of historical circumstances, including the ancient system of rhetoric and its abuses, as well as the Manichean cult that for a time attracted Augustine. You certainly get a firm sense ... 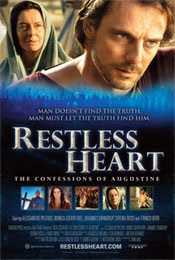