A Pope for All Christians

Why believers of all stripes should care about the new head of the Catholic Church.
Timothy C. MorganMarch 13, 2013
Image: Christopher Furlong / Getty
A Pope for All Christians
This article is from the April 2013 issue. Subscribers can read all of CT's digital archives.

When the new pope is consecrated, he will inherit a troubled global church. Internal scandal and unaddressed external problems pose great risks to the vitality of Catholicism. But the consequences of success or failure are huge for the church universal, the world's 2.1 billion Christians of every denomination.

This is more than a butterfly effect. Rome is not Las Vegas—what happens in Rome will not stay within the borders of Vatican City. One consequence of globalization is that the walls that have long divided Catholics from Orthodox, mainline Protestants, evangelicals, and Pentecostals are eroding.

Brian Stiller,a global ambassador for the World Evangelical Alliance, commenting about Catholic and evangelical relations, wrote on his blog recently, "Not in 500 years have the two sides been so close and friendly."

The challenges inside the Vatican and the Catholic Church are familiar, and they are of concern to every Christian who longs for a healthy body. Two cardinals, Keith O'Brien (Scotland) and Roger Mahony (Los Angeles), are just the latest Catholic leaders who stand accused of wrongdoing. Several priests allege that O'Brien initiated "inappropriate" behavior, possibly sexual, with them. Court documents reveal that Mahony relocated priests, known to be sexually abusive, to shield them from prosecution. In addition, a money-laundering scandal has tainted the Vatican's reputation of integrity. And the so-called Vatileaks scandal has pulled back the curtain on infighting and factionalism within the potent Catholic curia, the leadership core.

Our point is not to kick an institution that's already downed by scandal. Protestants, after all, are well acquainted with ...

A Pope for All Christians

A Pope for All Christians
expand
hide this 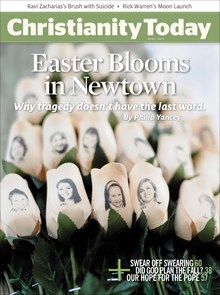 This article is from the April 2013 print issue. Subscribe to continue reading.