The world made it past December 21, 2012, and countless other forecasted doomsdays before that. But fascination with end-of-all-things disaster remains a pop culture staple. Whether by zombies, viral contagion, robots or Rapture, the final act in earth's story is more popular than ever as big-budget fodder for Hollywood.

There's a lot to ponder about the why of this trend, and earlier this summer, our own Alissa Wilkinson wrote an insightful piece on the matter, suggesting that these sorts of films might serve as a coping mechanism for a jittery "BREAKING NEWS" culture ever more expectant of imminent danger and disaster. Apocalypse escapism is somewhat counterintuitive: because we know the world could fall apart at any moment, maybe we seek visualizations of it to preemptively ease the trauma. And this sort of helps explain the rise of apocalyptic comedies, like 2013's This is the End. As Wilkinson writes, "You don't have to stay awake at night worrying about the end of the world if you can just make jokes about it when it gets here."

Edgar Wright's The World's End is the latest example of this. The film follows a group of five men in their 40s who return to their suburban U.K. hometown, Newton Haven, to attempt an epic pub crawl ("The Golden Mile") culminating in a final pint at the aptly named The World's End. Led by ringleader and alcoholic Gary (Simon Pegg), whose former best friend Andy (Nick Frost) is now a teetotaler and insists on drinking water rather than beer, the group tries to rekindle their old camaraderie by attempting the pub crawl they failed to finish in their teenage years. 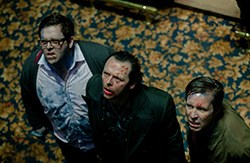