The Coens are legend-building again, this time with a striking resemblance to one of their old characters.
Alissa Wilkinson|December 6, 2013
Image: Alison Rosa / CBS Films
Oscar Isaac in 'Inside Llewyn Davis'
Our Rating

Folk singer Llewyn Davis (Oscar Isaac) is having a pretty bad week, probably because he's in a movie written by Joel and Ethan Coen. He got beat up in an alley by a stranger, and he recently lost his musical partner. Some of his friends are making a living with music, but his solo record isn't selling. He's sleeping on people's couches. It's cold out, but he doesn't have a coat. He lost a friend's cat. His sister isn't going to loan him any money. Oh, and he might have impregnated his best friend's wife. 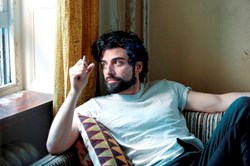 Clearly the only thing to do is set off for Chicago to see Bud Grossman (F. Murray Abraham), a producer who has a copy of his record and is his last real shot at making his passion pay the rent. So he commences hitchhiking and ends up in a car with a washed-up junkie jazz musician (John Goodman) and his brooding beat poet valet (Garrett Hedlund).

Things are not looking up for Llewyn.

Inside Llewyn Davis is a darkly funny film that recreates the texture of the Greenwich Village folk scene in 1961, and for those of us who love the Coens' meandering storytelling style, it's a masterpiece. It features some truly outstanding performances, both musical and thespian—particularly from Isaac, who performed the music live, as well as Justin Timberlake and Carey Mulligan, who play Llewyn's sweet-natured best friend Jim and his vitriolic wife Jean (who calls him "King Midas's idiot brother," alongside other choice terms). The Coens collaborated closely with T Bone Burnett, the music producer with whom they worked on O Brother, Where Art Thou (the film's soundtrack also features Marcus Mumford and Punch Brothers). And it looks good, too, thanks to cinematographer Bruno Delbonnell, whose other work includes the visually sumptuous Amelie.

It's also rich with narrative and symbolic layers and allusions, so many that I can't write about all of them because this essay would be at least three thousand words longer than it is. (Believe me, it was hard to refrain.) But like pretty much every movie the brothers have made, Inside Llewyn Davis improves if you put on some moviegoing spectacles and watch it with care (and it rewards a re-watch, too).

This is important to remember: the Coens are modern-day myth-weavers, contemporary legend-builders. Their characters and plots are often drawn from archetypes that already exist in our collective imagination. No matter what their movies are about—incompetent CIA agents, cheating wives, baby thieves, Midwestern cops—there's also invariably some kind of Big Story underneath, too, which is why a number of their movies are populated by zany larger-than-life characters who function as types as much as people. 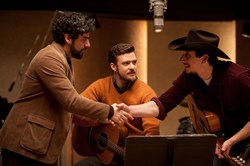 I'm no classics scholar, but as a rule of thumb, I think about myths, legends, fables, and folktales as the stories a group of people tells each other about themselves in order to understand who they are. Scholars argue over whether and to what degree these stories originate in allegories or actual events, but as someone recently said to me, they are in a sense "more true" than the facts: they shape our imaginations about our identities as individuals, families, and communities. A creation story, for instance, tells a society where it came from, where it's headed, and what it can expect to encounter along the way. And so even if the events didn't "happen" exactly the way the story has it, it's still very true.

That's a tricky thing for us moderns, who tend to define "true" things as "events that actually happened in our universe in space and time." But another kind of "truth," driven by narratives we tell one another and take in together, can also shape reality in powerful ways. Consider how American stories about cowboys have shaped the way Americans think about themselves on the world stage: self-sufficient independent individuals wearing white hats and riding forth to serve justice.

The Coens have been drawing on legends and archetypes (especially those familiar to Americans) since they started making movies. Blood Simple (1984) traces its lineage through noir classics like Double Indemnity (1944). Raising Arizona (1987) features a hell-raising motorcyclist who seems to be the kind of demon of indeterminate origin that Javier Bardem would later portray in No Country for Old Men (2007). The Big Lebowski (1998) is enough of a head-scratcher that it's been interpreted as everything from political commentary about the Gulf War to a fable about a latter-day messiah. True Grit (2010) is a remake of a classic Western, which originally starred the most iconic of all cowboys, John Wayne. And A Serious Man (2009) is transparently the Coens' remake of the story of Job, with a twist ending. 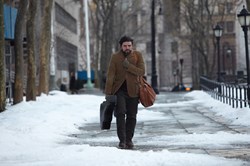 One of my favorites, Fargo (1996), both capitalizes on the modern penchant for "true" stories and inverts it. The film's title cards claim that "THIS IS A TRUE STORY." But the brothers admitted later that the whole plot is fictional, though based on various crimes drawn from the newspapers. "We weren't interested in that kind of fidelity," Joel said in an interview. "The basic events are the same as in the real case, but the characterizations are fully imagined . . . If an audience believes that something's based on a real event, it gives you permission to do things they might otherwise not accept."

Inside Llewyn Davis bears a cosmetic resemblance to the most obviously mythical of the Coens' films, O Brother, Where Art Thou (2000), with its dual backdrop of an Americana soundtrack and references to Homer's Odyssey. Both films fit the larger narrative type to which Homer's poem belongs: the hero goes on an epic journey, then returns home (at one point Llewyn even spots the movie poster for The Incredible Journey, though it's a bit of an anachronism, since it actually came out in 1963).

But while O Brother's plot draws heavily on Homer's, the references in Inside Llewyn Davis seem to have as much to do with James Joyce as Homer. Our hero Llewyn, like Leonard Bloom in Joyce's Ulysses, has episodic hapless adventures around town—in this case, New York's Greenwich Village, with a mid-film jaunt to Chicago—with no conquering hero's end.

For all its sibling resemblance to O Brother, though, beleaguered Llewyn's real twin is Barton Fink, the unlucky playwright-turned-Hollywood-flack played by John Turturro in the 1991 film. Like Llewyn, who's living around the edges of success but manages to torpedo his chances at every turn (maybe on purpose), Barton Fink has experienced a bit of success, but is loathe to capitalize on it too much, lest he lose touch with the "common man." (Unlike Llewyn, Barton Fink is actually getting paid rather handsomely for his work.)

Both men are presumably on their way out as artists. And both are struggling with the rapid commercialization of their craft—folk music on one hand (the film covers the Village folk scene during the very last week before the Age of Dylan) and theater and film around the apex of Hollywood's Golden Age on the other. (Both also experience some trauma at the hands of a psychopathic John Goodman.) 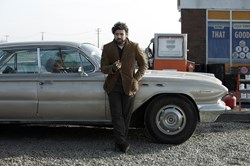 There's some speculation that the second half of Barton Fink is all some kind of dream, and it's at least possible that most of Inside Llewyn Davis is, too—at the very least, both films let viewers dwell for a bit in their protagonists' state of mind. Ethan Coen remarked that it was "correct to say that we wanted the spectator to share in the interior life of Barton Fink as well as his point of view."

Most importantly, though, both of these stories capitalize on another of our cherished cultural myths: the plight of the creative soul. Making stuff is hard work. The roadblocks are many. (One imagines the Coens know a thing or two about that.) Barton Fink, in a film the brothers wrote after hitting a wall with Miller's Crossing, is suffering from a couple of classic artists' problems—creative block, belligerent business types, scary next-door neighbors. Llewyn Davis, on the other hand, has created most of his own problems by being a bit of a curmudgeon. But both of them are crashing and burning because they are not just living as artists, but living the legend of the artist who fights to stay "authentic."

Ironically, both men run into problems because of their idealized versions of authenticity. Barton's so consumed with his own problems that he winds up alienating the only "common man" he encounters. Llewyn scoffs openly at Jean's "careerist" and "square" and "sad" dreams of a normal life. He tells his sister he doesn't want to just "exist"—"existing ain't so bad," she retorts—and is horrified by the thought of ending up like his father, a merchant marine who's living out his days a broken-down old man in a nursing home. And he winds up loudly taunting the only truly "authentic" folk musician in the whole movie.

But the Coens, ever tricksters, invert the mythos and give us a new one, one that's undeniably true even if rooted in fiction: that of the artist whose genius needs to take a back seat to his squashed humanity. In a few great moments, Llewyn encounters writing on the wall (once literally) that asks him to consider his life's path. The junkie jazz has-been is a laughable, pitiable mess. Jean fairly spits at Llewyn for never thinking about the future. "What you do," the mysterious assailant mutters as he stalks off, leaving Llewyn writhing with pain on a cold, wet sidewalk.

In the end, we don't really know where Llewyn will land. Significantly, though, the version of the folk classic "Fare Thee Well (Dink's Song)" on the soundtrack, which Llewyn also recorded with his partner, differs a bit from the version recorded by people like Bob Dylan and Jeff Buckley; it includes a verse with the lyric, "Life ain't worth livin' without the one you love."

Llewyn's just starting to figure that out.

Inside Llewyn Davis is rated R for "language including some sexual references," and that's exactly correct. Those sensitive to those matters should take a pass on this one, though it doesn't reach Lebowski heights of profanity, by a long shot. There are a lot of f-bombs and other four-letter words, often as epithets or expressions of exasperation, occasionally as crude references to sex, and once as a reference to excrement. Two characters briefly discuss male genitalia. One character is considering an abortion. A character passes out from drug overdose. And Llewyn gets beat up by a stranger in a dark alley.

Alissa Wilkinson is chief film critic at Christianity Today and assistant professor of English and humanities at The King's College. She tweets at @alissamarie.