Saving Mr. Banks is the second Disney movie this year about an isolated, lonely, emotionally crippled woman whose cold heart is eventually thawed by love.

In this case, the snow queen is P. L. Travers (Emma Thompson). She isn't royalty, but she has been getting her way for so long that she no longer knows how to connect with people emotionally—least of all the very charming, very American, very emotionally seductive Walt Disney (Tom Hanks). As the film opens, Travers has been rebuffing Disney's attempts to buy the rights to her novel, Mary Poppins. Broke and unwilling (or unable) to write more, she agrees to hear him out, hoping against hope that she will somehow be able to cash his check and yet maintain creative control over her characters.

As the film progresses, its story splits into two threads. As Travers terrorizes Disney's team of creators and rebuffs his overtures of friendship, flashbacks take us through her childhood in Australia. Through them, we learn the supposed inspirations for Mary Poppins. And we may come to understand why she's so attached to story details that at first seemed arbitrary or insignificant. 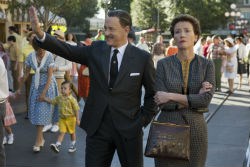 On paper, the film has all the elements of a smash. Disney (the studio) has mimicked Disney (the film's character) by sparing no expense to assemble a top tier creative team. You know your cast is outstanding when Emma Thompson's performance is the most bland.

Then again, Disney (the studio), like Disney (the film's character), has stacked the deck against her.

It's not enough that Travers is relentlessly rude to Disney himself—maligning his theme park and insulting his films. She commits the cardinal sin of all American movies: she is rude to the little people. She lambastes chauffer Ralph (Paul Giamatti) for daring to bring her tea in a paper cup, for asking about her family, for asking about the weather. "What's wrong with his leg?" she sniffs as one of the Sherman brothers limps out of the room she has exiled him from. When told that "he was shot," Travers doubles down with another snippy retort.

Sure: the backstory tells us that Travers has been hardened by suffering. But so, too, has Walt. The film's heart and soul is in the four or five conversations between the two artists—she with her insistence that children must (as she did) face the hard facts of life, he with his belief that everyone should (as he did) transform the pain into happiness with a can-do attitude and a little revisionist history. It is also undeniably true that nearly every fear Travers has about what Disney will do to her beloved story is realized . . . and that once he has control, the gentle old man gives way to a more calculating businessman.

It's hard not to forgive him, though, when the film includes a scene (apparently somewhat apocryphal) of Travers sobbing while watching the film and Disney assuring her that everything will be okay for her projected father figure. It's not enough for the film that Disney gets his way—he has to be vindicated.

Saving Mr. Banks is a good movie. It's very entertaining. But beneath its surface is a great movie trying mightily to get out—one that is more truthful about Disney's more calculating side, one that acknowledges Travers didn't so much face her demons as make a deal with her own personal devil. To make that film would require something more than a momentary decision to not invite Travers to the premiere in order to represent the iron side of a leader who is used to getting his own way. Disney here is presented as so iconic, so beloved, that people want to please him. He never demands because he never has to—people just love him so much they want to give him what he wants.

And what's not to love? Tom Hanks is masterful, investing Disney with charm and intelligence. Even though Travers antagonizes him (she demands the entire film be shot without using the color red), he turns the other cheek. Even though the creative team works with her daily, it's Disney who plays Freud, figuring out what is really behind her uninviting exterior. He works late, encourages the creative team, and dispenses praise generously: "it's not just ironic, it's iconic . . . I won't be able to stop singing that for weeks!" When he takes Travers to the Magic Kingdom, he signs autographs for the visitors and graciously suggests that they should desire Travers's autograph more than his own, since she is the bigger genius. 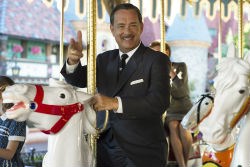 Walt is charming, but so too was Travers's father. He was the other man in her life who wooed her and wowed her with stories of magic kingdoms just at the next train stop, but did little to help her live in the real world. I kept waiting for the greater version of Saving Mr. Banks to emerge, one which understood not just how her biography informed Mary Poppins, but also her deep ambivalence about the very facets of Disney's character that the film insists on lionizing.

Still, I suspect most audiences, unlike many critics, won't make the perfect the enemy of the good. If, like Frozen, this movie doesn't perhaps stand up to the sort of hyper-scrutiny that the Disney label brings, it does (like Frozen) understand that this kind of scrutiny is for the sourpusses, critics, and cranks. If it can get viewers, like Travers, to tap their toes as "Let's Go Fly a Kite" is born, they'll be too busy revisiting Mary Poppins to look up the facts on Travers's Wikipedia page.

As the credits roll, we get the requisite archival footage of the actual participants. In this case, it's a tape recording of the actual participants discussing the storyboarding. The film doesn't have to be the whole truth and nothing but the truth—it just needs to be close enough that we don't feel too guilty for preferring its version to the real thing. It is, and we don't.

Make people just a little happy and they'll forgive you most anything. Even seducing them.

Saving Mr. Banks is rated PG-13, although it has been rated "G" in at least one Canadian province. There are some potentially frightening scenes for children, including one where a young child wakes up in the middle of the night and has to stop a parent from doing something rash. Ginty's father is shown under the effects of alcohol several times, and she seems him cough up blood while he is sick. Walt Disney smokes, and there are some mild expletives.