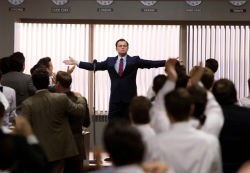 Leonardo DiCaprio in 'The Wolf of Wall Street'

Scorsese tells the same story, though this time it's set in the 1990s, when Belfort founded his brokerage (which he named Stratton Oakmont largely because it sounds posh) after getting hooked on the Wall Street high life. Through some fancy financial wrangling and hard sells, Belfort and his buddies get filthy rich in a hurry, quickly becoming the sort of vulgar young men Tom Wolfe skewered as "masters of the universe" in Bonfire of the Vanities.

What happens after that isn't really of any consequence: it's just one huge insane party from start to finish, with so much money floating around that Belfort crumples up hundreds and throws them in the garbage when he gets bored, or tosses them off his yacht at departing FBI agents, hollering that he calls them "fun coupons." Whatever he wants, he gets—until it all starts to catch up with him.

Belfort and Adams/Diggler have a single life philosophy, best expressed in the hashtag of the summer: #yolo (you only live once). You're young once, and if you snort enough cocaine you're invincible anyhow, so why not do it all and experience it all? The party will probably never end.

Let's be clear: The Wolf of Wall Street is a great and possibly terrific movie, as movies go, one of the best Scorsese has made in a long while. It makes no sense for a three-hour movie in which you basically know what will happen to be this engrossing. In that regard, it's actually better than Boogie Nights, which loses steam in its final hour. Wolf is also very funny, with a screenplay by Terence Winter, Boardwalk Empire's creator/writer/executive producer (Scorsese was heavily involved with the creation of that show; he directed the pilot and remains an executive producer).

And for once, DiCaprio is not playing anyone who is insane or carefully wooing a pretty girl or keeping a few cards up his sleeve. He's flinging his cards around, a whirling dervish of a broker with the magnetism and reckless abandon of Tom Cruise's evil genius/motivational speaker in Magnolia. Someone finally let him just go for it, and by gum, he sure is. (It's not just him—the movie's populated by great performances all around, from Jonah Hill to Rob Reiner to the weirdest Matthew McConaughey ever and dozens more.)

Basically, if you Google "off the hook," you'll get redirected to Wolf's IMDB page.

Leonardo DiCaprio and Matthew McConaughey in 'The Wolf of Wall Street'

In what seems almost too obvious a comparison, Wolf is the film that this summer's Great Gatsby probably ought have been, if it was being honest. In both, DiCaprio plays a wildly lonely man who, dissatisfied with his working-class upbringings, reinvents himself as moneyed elite, new money who can throw the biggest parties, buy his friends, and make everyone love him. But whereas Gatsby played it safe and thereby undercut the level of insanity that both gave the '20s their name and made the crash of 1929 so tragic, Wolf goes all out, turning it up to eleven. (It's worth noting Belfort's similarity to Mad Men's Don Draper, too; here's our piece on Gatsby and Draper from earlier this year.)

But Gatsby's failures aside, it's important to note that both films do more than merely indict their protagonists. They chronicle periods of our recent history (the Roaring Twenties and Roaring Nineties) in which it was possible to reinvent oneself and become one of the big dogs without much fear of repercussion.

This is important, for two main reasons. First, as Wolf makes clear, Belfort has suffered, but it's more his pride that's taken a hit than anything else. As he points out, being wealthy insulates him from most of the consequences of his actions. Sure, Belfort went to prison, but his time there was suspiciously close to the proverbial walk in the park. And just this October, federal prosecutors filed a complaint against Belfort because he's made nearly $2 million in sales of his memoirs, movie rights, and motivational speaking engagements in the last six years, but paid out only a fraction of the restitution requirement mandated by his sentencing agreement. According to Businessweek, the government is not holding Belfort in default of his payments, in order to keep negotiations open. It seems at least troublesome that this is true.

And that brings up the second reason this is important: Gatsby gets rich from shady deals in bootlegging during Prohibition. Adams/Diggler gets rich from his work making pornography. Both men provide a vice that people want in order to fulfill a desire for something gone out of control.

'The Wolf of Wall Street'

Belfort gets rich because, as he puts it, everyone wants to be rich, and he can dangle that promise in front of them and reap all the rewards for himself. Yet he sells not by convincing people that they want money, but that they want a particular life. (The movie makes a small, but important nod to what the "big guys" like Goldman and Lehman are doing while Belfort's scampering around: collateralized debt obligations—which include the sort of securities that made subprime mortgates possible. Those are the debt instruments that took down the global economy not too long ago by making it possible for people buy houses they couldn't afford.)

There is certainly a legitimate place for market-making and investment and wealth; those are the rails on which an economy runs. What Wolf of Wall Street (and Gatsby and Mad Men and Boogie Nights) reminds us is that guys like Belfort find the loopholes and get away with their excesses because they're selling our desires back to us.

He's in the wrong. That's for sure. But to walk away and not realize we're at least a little complicit, too, would be foolhardy.

Few CT readers would be glad they saw this film, so let's just stave that off at the outset. Take a quick mental inventory of the commandments handed down on Mt. Sinai: they're definitely all broken here, with the possible exception of murder, often quite graphically (the film got what we might call a "hard R"), generally with glee—though from what I know of certain pockets of Wall Street culture, this movie is no overstatement.

I can't really enumerate everything here, but here's a sampling: Nudity of all sorts, male and female. Profanities and obscenities from start to finish. Rampant drug use of many varieties, including cocaine, alcohol, crack, and a bunch of pills you supposedly can't get anymore. Prostitution, crossed with drugs and other things, occurs. Several people get beat up badly, sometimes drawing blood. People vomit and spit and spew. People get very high. People mimic the sexual act frequently and perform it quite a bit, too. There's a long scene discussing what I guess can only be described as "midget throwing" in fairly offensive terms. One character is married to his first cousin, and a crass conversation ensues that also uses an offensive word for the mentally disabled. Masturbation is discussed, and in one case happens on screen while a character is very, very under the influence. Characters, obviously, cheat on their wives. I could go on, but all this (and more I'm forgetting) mostly conspires to paint an accurate picture of Belfort's level of debauchery. The crowd did audibly gasp and tut in one scene, in which a declining Belfort hits his wife, then punches her in the stomach.

Perhaps most disturbingly, it's not necessarily that all of these things are depicted that's the problem so much as the fact that the viewer's response to them will vary based on whether or not he or she finds the lifestyle shown attractive, or despicable. In other words, in ways that are similar to Mad Men, a viewer's desire for Belfort's money and the lifestyle it brings could be a factor in making some viewers more or less tone deaf to the moral judgments buried in the film.

Critics and viewers have been divided on whether the film goes far enough in indicting Belfort, or whether the film functions as a playbook for future would-be Belforts; I'd argue the film shows that our system is set up such that some people can get away with their crimes, so long as they're rich enough. But some viewers may want what they see and be willing to take the risk. The best piece I've read on this discussion is by Indiewire's Sam Adams, and I'd recommend reading his take to the end (it contains two profanities), even if you have absolutely no plans to see the movie, as a starting point for conversation.