In 2009, I was lucky enough to see the great Cate Blanchett (and Gatsby's Joel Edgerton) in the Sydney Theatre Company's production of A Streetcar Named Desire near my home in Brooklyn. Blanchett was Blanche, the washed-up former Southern belle with secrets and delusions of grandeur who flees to her less sophisticated little sister, Stella, and her brawling husband Stanley when she falls on hard times.

Blanche looks down on Stanley: "I guess he's just not the type that goes for jasmine perfume," she says to Stella, pointing out his inadequate taste when contrasted with people of their breeding. But her sense of superiority is her downfall. Truthfully, I don't remember much about the rest of the production, but I remember that Blanchett was exquisite, her Blanche equally beautiful, pitiful, and despicable.

Woody Allen apparently saw the production, too, because he's just made Blue Jasmine, in which Blanchett stars as Jasmine, a washed-up older sister with a secret who flees from her Park Avenue home after misfortune befalls her due to her unscrupulous husband (Alec Baldwin), cast in the Bernie Madoff mold. She heads to San Francisco to stay with her less sophisticated little sister, Ginger, and her sincere-if-greasy boyfriend. It wasn't billed as an update of Tennessee Williams' classic play, but that's clearly what Blue Jasmine is. Both Blanche and Jasmine are desperate to keep up the appearance of their luxurious former lives; both have been the victims—maybe?—of despicable husbands and weak men; both find their little sisters' choice in men disgusting.

And both have dark, ugly secrets to keep.

Much has been written about Woody Allen's extensive career ... 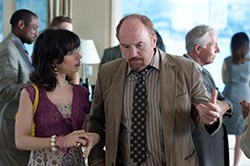