What the latest Kristen Wiig vehicle has to say to Christians who have embraced a culturally-engaged, intellectually serious faith.
Alissa Wilkinson|July 20, 2013
Image: Nicole Rivelli / Roadside Attractions
Our Rating

I'm guessing this isn't the introductory sentence you were expecting, but stick with me: Dr. Richard Mouw, the renowned evangelical theologian and philosopher—and, most recently, president of Fuller Theological Seminary—wrote a book in 1994 called Consulting the Faithful: What Christian Intellectuals Can Learn from Popular Religion. In it, Mouw writes directly to those Christians who feel they have, in some sense, "graduated" from the sort of church they grew up in—from, perhaps, a low-church evangelicalism to what they see as a more culturally-aware, intellectually-engaged faith.

Mouw's argument is that the Christian intellectual (or just one who wants to be) has a great deal to learn from the religious practice of the masses. In the book he points out the poverty we bring on the church and on our world if we forget this. It's a reminder that resonates, sometimes uncomfortably, with those who (for instance) find themselves wincing at corny skits when they go home for the holidays, or turn up their noses at everything having to do with Christian subculture. Certainly there might be things to discuss and debate and even eschew in American popular religion, Mouw says, but let's not make the grave mistake of tossing it all out in pursuit of something more highbrow and cool.

I found myself thinking about Mouw's admonition in an unlikely place: a movie theater in midtown Manhattan, where I was watching Kristen Wiig sniff disdainfully at Annette Bening's taste in men. Girl Most Likely belongs to the genre of films about sophisticated city-dwellers returning home to the heartland/suburbs/New Jersey to discover that's where true love and contentment lies, which arguably ... 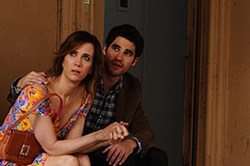