Comparing Grown Ups 2 to Pacific Rim reminds one of the old David Sedaris joke about a stewardess who asked an airplane passenger which he preferred for his meal: the chicken, or a sandwich made with excrement and shards of broken glass. After a lengthy pause, the passenger inquires, "How was the chicken cooked?"

Sedaris made his joke during an election season to described his bewilderment at voters who claimed, with less than a month to go before an election, that they were still undecided. I am similarly at a loss to imagine the potential moviegoer who is waking up on Friday morning and trying to decide what movie to see this weekend: "Grown Ups 2 or Pacific Rim? I just can't decide. Let's see what Christianity Today has to say . . . "

Pacific Rim is the chicken here. While I can't quite convince myself that it is the equivalent of a four-star meal that some of its geeking fan boys want it so desperately to be, I concede that it is, at the very least, edible. And in a summer of downed presidential residences, singular rangers, and multiple hangovers, the merely competent grows in our esteem, if not our imagination.

A cross between Real Steel and Godzilla, Pacific Rim follows the military-action formula from the start. It uses an opening battle scene to explain (I use the word loosely) the conflict and outline the basic weapons and strategies used by its participants. Earth is being attacked by giant monsters coming through a dimensional portal ("the breach") in the Pacific Ocean. They are fought back by a group of rangers in "Jaegers," metallic, humanoid-shaped armored vehicles so large they can only be controlled by two pilots whose minds are melded. An early failure ... 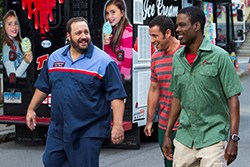