Snyder's Superman reboot is visually stunning and well-acted, but lacks the humanity of The Kings of Summer, a little coming-of-age movie with a big heart.
Jackson Cuidon|June 14, 2013
Image: Clay Enos / Warner Bros.
Our Rating

Superman is a complex character, as superheroes go, too complicated to reduce into hero stereotypes and character-bio shorthands. He is Clark Kent, farm boy from Kansas; he is Superman, hero of Metropolis and symbol of Freedom, Justice, and The American Way; and he is Kal-El, alien from Krypton, his parents killed and homeland destroyed. And the most interesting, human moments experienced by Superman always show up in the interplay between his coexistent identities.

But in Zach Snyder's Man Of Steel, Superman (Henry Cavill, best known for his work on The Tudors) is there mostly to satiate that part of the American psyche that wants their messiahs to punch things, too. It's understandable why Snyder, director of stylish, brooding action movies like 300 and Watchmen, chose to go this route: the film is packed densely with information and plot, covering the death of planet Krypton, Clark Kent's upbringing in Kansas, his antagonists and their objectives, and the myriad twists and turns that result.

The hand of Christopher Nolan (who shares a story credit) is clear here—anyone who sat through The Dark Knight or Inception will recognize Nolan's proclivity for stories with climaxes that go on for half an hour. So amid all the action scenes, flashbacks, and cutaways that follow around Lois Lane (a precedent-breaking redhead, Amy Adams) as she investigates into who exactly this superhuman person is, there simply wasn't room to earnestly explore Superman's identity issues.

Unfortunately, the movie's climax still depends on Superman feeling torn between his respective roles, human/alien/messiah, all of them in some way true and all of them impossible to entirely fulfill. But we almost never ... 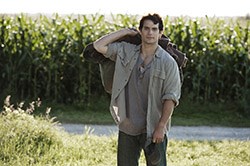