The caper film is just engaging and playful enough to be entertaining on the whole, but may leave you feeling slightly more robbed than wowed.
Nick Olson|May 28, 2013
Image: Barry Wetcher / Summit Entertainment
Our Rating

During an early scene in Louis Leterrier's new caper film, Now You See Me, a group of four magicians are together performing a Las Vegas show called "The Four Horsemen." But Leterrier doesn't just want to show us what happens at the show: he wants the stage performance conveyed in such a way that we moviegoers feel like we're part of the live audience. Every sense of the act's performance art—the flashy magicians' entrance, the quipping and dramatic setup, the selection of an audience member for participation—brings us in so we can give in to the illusion. So when the four horsemen teleport an audience member to Paris so that he can rob his own bank—eventually suctioning the money which then floats over the audience like confetti—Leterrier is banking that we'll not only invest ourselves in the magic show, but that we, too, will be entertained by the apparent robbery.

To the extent that we're entertained, then, Leterrier's trick is effective. Which is to say, whether or not you like the movie may depend on whether the art of producing illusions amuses you.

Now You See Me begins by introducing us to four individual street magicians who each seem to employ the craft with a devious sense of craftiness. The four magicians—Daniel Atlas (Jesse Eisenberg), Henley Reeves (Isla Fisher), Jack Wilder (Dave Franco), and Merritt Osbourne (Woody Harrelson)—are mysteriously brought together by an unknown entity one year before the aforementioned Las Vegas show, which is sponsored by a powerful and wealthy insurance businessman named Arthur Tressler (Michael Caine). Each illusionist character is mostly defined by his or her qualities as performance artists. ... 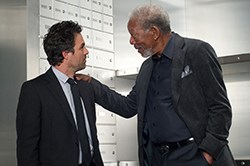