Jump directly to the Content
Explore
This Is Our City

Lamppost Farm says it may be good for your soul.
Bret Mavrich|October 22, 2013
Image: Andy Ryan / Getty

The chicken de-featherer is nothing short of a marvel. It's a 55-gallon drum lined with rubber fingers and a motorized, spinning floor that keeps chickens tumbling in the drum. The first time I watch Steve Montgomery lower two dead birds into the machine only to pull them out seconds later, nude and ridiculous-looking, I feel like I've just seen street magic.

"Someone should Vine that," says Tim, the guy next to me. He's referring to the latest social media platform that allows users to share six-second videos. It's a brilliant idea. So I do it.

Tim happens to be a line chef at Salt of the Earth, an award-winning restaurant in Pittsburgh, Pennsylvania, that specializes in dishes prepared with local ingredients. But they are by no means alone. The local food movement has been gaining steam, ever since somebody discovered that the average distance food travels before it reaches your table is 1,500 miles. Those concerned about the economic and health implications of long-distance food supplies have coalesced into a movement, complete with a string of indie documentaries decrying commercial food production, and a bevy of artisan restaurants sourced with locally grown ingredients in almost every major city. Foundational to the movement is the trust between consumers who are close (relationally and geographically) to the people who grow and prepare their food, something that dramatically reduces the "food-footprint" of any meal. It's the dietary equivalent to "I know a guy who knows a guy."

And Montgomery is happy to be that guy. Which is why I've come to Lamppost Farm, a 75-acre patch of land near Columbiana (pop. 6,400) in eastern Ohio that Steve and Mel Montgomery ... 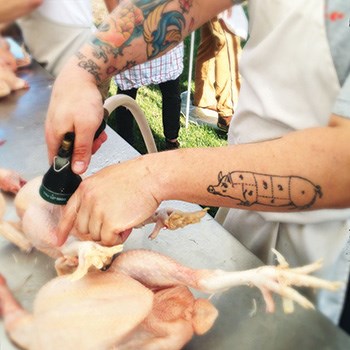 This article is from the November 2013 print issue. Subscribe to continue reading.