No one knows exactly what happened when Mark Driscoll arrived on John MacArthur's California church campus last Friday for the much-discussed Strange Fire conference. The Seattle pastor, who was visiting nearby Long Beach for the Act Like Men conference, tweeted to his 400+K followers October 18 that he was "Handing out free copies of my new book, A Call To Resurgence, at #StrangeFire." Two hours later, he tweeted, "Security confiscated my books," and linked to a photo of himself talking to an apparent Grace Community Church staff member.

A MacArthur assistant later told Religion News Service that the books were "not confiscated and that there was nothing confrontational," and that Driscoll had given the box of books to staff as a "gift." Christians—including Driscoll and MacArthur, who is promoting a new book of his own—disagree whether the more charismatic gifts of the Holy Spirit continue today. Book gifts, however, are typically not confiscated but only received.

Meanwhile, Christian bloggers noted that at the very least, Driscoll managed to draw attention to his new book, to be published by Tyndale November 5. Here are some other Christian book promotions that didn't pan out as well as Driscoll's. (Tweet your own and tag @ctmagazine, and we'll add our favorites to this list.) 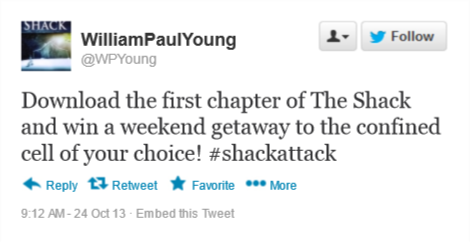